Ever argue with someone over the best way to get a job done and wind up so irrationally angry you just start throwing up your hands and going, "FINE! Just tear the coupons instead of cutting them, but don't blame me when you ruin a UPC, you big fat jerk!" Now image you're both burly warriors with chips on your shoulders and the eyes of an entire kingdom upon you to boot. That's the situation in Axis Games' action RPG Hands of War 3, where each leader of two opposing factions thinks they have the best solution to restore the kingdom after war. Before it gets to the name-calling, hair-pulling stage, you're brought in, and it's up to you to decide who you want to work for and influence the kingdom and its heroes to vote in your favour. 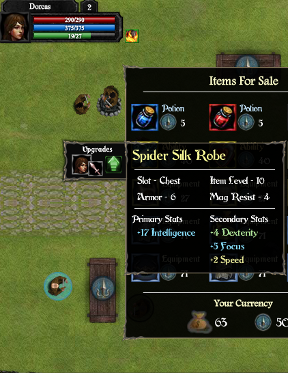 After creating a character and choosing a class, you'll be booted into the game world proper where a handy tutorial will walk you through commands and such as they appear. It's still pretty simple, though. Use [WASD] to move and click on people and things to interact, with icons or hotkeys to open various menus. Combat, when it happens, is real time, and as you defeat enemies you'll earn experience and level up, allowing you to get new abilities or spend skill points. You can also gain experience by completing quests, and the quests you decide to take will influence your standing with different factions... important since their attitudes towards you shift with your actions and can come with rewards or penalties. I'm not so sure why everyone thinks allying with this newcomer is such a great idea, though. Calling your faction "The Shadow Runners" and having a big skull for an emblem isn't exactly reassuring. I mean, come on... were any of the Autobots honestly surprised when the Decepticons betrayed them?

The Hands of War series is one of those games that have only gotten more impressive and bigger in scope as they go along, and you can really tell the drive and passion that has gone into crafting this latest installment. Though still a little... rustic in design and more focused on leveling and combat than anything else, it's the sort of sprawling casual action-RPG experience that can suck you in for hours. Provided, of course, you can get over how slow it is to start. The game is not without its quibbles, of course. Aside from the minor cosmetic issue of people referring to you as a male regardless of whether your avatar is female, the larger cosmetic issue could be summed up simply with "My eyes, my freakin' eyes!" It's a tiny, tiny game, visually speaking, and it feels like if it had been just 25% bigger, those of us who aren't quite so eagle-eyed would do less squinting. If you don't mind a slow progression, however, Hands of War 3 is an easily addictive casual action-RPG game that showcases the passion and drive its developer has for expanding and improving every step of the way.

This one kind of reminds me of Dink. Not a bad way to waste a few hours.

Having some issues with the quest log. I took all three quests for the merchant factions, thinking I could outsmart the game and keep all three neutral; now they are all stuck, I can't abandon, and they are clogging my quest log so that I can't pick up any other quests.

don't take all three merchant faction quests! Just do one.