GUI Game, by Athletic Design is one of those point-and-click puzzle games that have you blitzing through a series of near-identical screens with a crafty puzzle to solve for each. However, GUI Game is a bit different from what you've seen before: here the menu interface is your puzzle provider, and that means there's a lot of entertaining, fourth-wall nudging challenges to confound you with. Gameplay's as simple as using the mouse to click the button that will take you to the next level while avoiding the cursor-swallowing black background. It's figuring out how that button will be hiding that's the challenge, and you'll need every trick and option the Graphical User Interface provides in order to triumph. 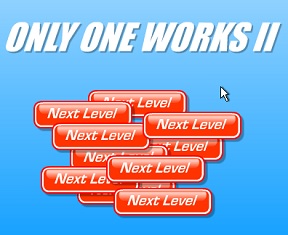 You have to wonder sometimes how well games built upon playing with the tropes and viewer expectations play to those who haven't experienced the genre works it's poking at. Are games like Humbug or Inquisitive Dave incomprehensible, or is it made easier for those without enough familiarity to be misled? One suspects that those who've become familiar of all the usual tricks used by games like DOOORS or 40x Escape will find GUI Game's playful deconstructions much more entertaining than those not so thrilled when a game seems to be showing off how gosh-darn clever it is. But hey, GUI Game is indeed clever, and the entertaining way its puzzles mess with form will have you shaking off the cobwebs in the lateral thinking parts of the brain.

Stuck on "Dying is Not Inevitable", but I can give hints for anything before that.

Be warned: if you close and reopen it doesn't save your progress.

Look in your level menu go to guide and follow directions. Try holding down the mouse button when you're on the right level.

you have to replay replay and try to end with cursor over the position where the button is in dying is inevitable. apparently if you hold down the mouse button, the "frozen" mouse cursor will move on replay level. Took me forever to discover that. Still not an easy task after discovery though.

For the "Dying Is Not Inevitable" level and basing my tip on the author's reply on a review on Newgrounds (2nd review):

You have to replay the previous level (named "Replay") so that the button overlaps the button of this level.

The positioning of the cursor is done by holding the left mouse button, which propels the cursor in its current direction, which can be changed by moving the button.

I love games like these, and this one definitely did not disappoint. :)

I need help for the level Stealth. I just can't get near with that cursed cursor.

I can see the button is hidden behind the background, but don't know how to get my cursor over there without "dying"

Where did that button go? If only we could make it appear somehow...

On the toolbar at the top left, go to Options, then Show, and turn Button on. Now click the button!

A Mind Of Its Own

Nothing too hard here; if you don't have the skills to move a mouse backwards, turn your mouse 180 degrees and then use it normally.

In Options, Show, turn Button on. Get out of the toolbar to see that tasty button.

We can't go into the black area, which conveniently the button is in. We might need to think outside the box to solve this one (pun intended)

Move your mouse out of the screen, around the edges of the game and go back in on the Next Level button. Click it!

Only One Really Works

If you have good eyesight, you should be able to tell which one is real. If not, slowly move your cloud of mouses off the screen. The mouse that takes focus away from the game is the real one.

You should know the drill by now; go to Options, Show, then turn on the button!... Wait, it's already on! So where could the button be? Hidden underneath something maybe?

In Options, Show, turn OFF menu. That pesky button was hiding underneath the toolbar!

Only One Works II

Hmm... How would we be able to tell which one is the real button? What can you do to a real button which you can't do to a fake?

In Options, Show, turn off the button, then back on. The one which disappeared is the real one.

The button isn't under the toolbar this time... what else could it be hiding under?

In Options, Show, turn of the background. There's the button! But how can we get there without being killed by the lack of background?

Go to Play, then Arcade Puzzle, to make a bridge of shameless plugs to the Next Level button.

In Navigation, Go to, the level Menu Maze should be a folder itself with one blank item. Upon moving the mouse onto it, you trigger the menu maze, which shouldn't be too hard to navigate.

From Menu Maze, go right, down, left, and then the lower path. From then on it's a one way trip to the next level.

Our mouse isn't moving. But all real mice move, don't they?

In Options, Show, turn on the 'cursor'.

So close, yet so far. No matter what technique of moving to the button you use, you can never catch it (so stop trying... seriously). How can we make it so that the button will not sense our mouse?

In Options, Show, turn off mouse. The Next Level button will no longer move and you can click on it (while still invisible). Preferably you should force it into a corner or edge so that clicking without a mouse is easier.

I just WONDER what this title is trying to tell us...

Oops, you died. The button never changes position, so that should be helpful, but there's not enough time after deaths to position your mouse correctly. If only there was a lengthier transition...

Replay the previous level, What A Drag!. When you beat it, position your mouse correctly while it does the spinny contracty thing so that you will start the next level already on the button.

Not hard by itself, but be warned that this level will cause major frustration in the near future. For now though, just move the Next Level button to the mouse...

Dying Is Not Inevitable

We know this trick. However, this time you can't move after you beat Replay. So you have to end Replay right in the correct position. But how do we move the mouse?

On Replay, clicking and holding will cause the mouse to accelerate in the direction it is facing. Now for the rage inducing part; you can't let go, otherwise you fail the level. So you need to end the level in the right position, continuously moving in an unpredictable pattern.

The easiest starting point is if you do Navigation, Go to, then Replay. Move the button to the correct position, and accelerate all the way there without moving.

This is HARD, and I can't really help much with it. So...

What A Drag II

What, you thought that Dying Is Not Inevitable was the last level? Of course not, you're ready for another round of torture. This is actually a lot easier, though. What could you use to make a bridge to the upper Next Level button? All of the folders in the toolbar either block the button or don't reach it. Maybe you don't use a folder...

Menu maze round 2! From the menu maze, go right, down, right, up, right. The rest is a one-way path to the upper (fake) button. Drag it to the lower button, drag it out of the way, click the real button and you win the game!

I'm not sure if this is the correct way to do it, but I solved it by turning off the background, then right clicking just outside the top of the game screen. I then followed the resulting gray path down to the button.

Have you tried making your cursor go in "stealth mode"?

Thanks shjack, but the hint-through came through just before you did and that worked.

I had tried seeing if the menu boxes would get me down there, but obviously didn't try hard enough to see if the sub-menu would work lol

I don't even think I'll try to get through "Dying Is Not Inevitable", seems too rage-inducing (especially using a little laptop trackpad instead of a "proper" mouse).

A thing which makes "Dying Is Not Inevitable" a bit easier:

If you start a click while the 'cursor' is on the button in Replay, you can cause the clicker to move forward in the direction it is facing, and you are able to release the button to stop it at any point, at which point you may repeat the process.

Lets make a bad user interface and call that a game. suuuuure

Did anyone try GUI Game II? I am stuck on the first level.

Move the upper mouse over "options", and then over "play". Click with the lowest mouse on the O of "Oddities" Then move the upper three mouses out in the black space on the right part of the screen. Put back the background, and click on the upper button.

@Jamilworm I have tried it after your comment. The puzzles are interesting but it is still ongoing (there are only 6 levels). For the first two levels of GUI Game II, here's a tip:

There is only one true cursor.
The cursor disappears when you enter the dark background.
Maybe you can use that to avoid selecting all menus.

Gameplay is as simple.

Just read it before posting it.

Thanks for kindly pointing out the issue. Fixed!