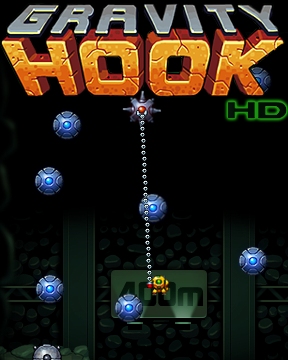 It was a problem that has befuddled the Greeks, mystified the Babylonians, drove the most brilliant dynastic Chinese scientists over the edge and it is even said to have had a hand in why Galileo decided to investigate planetary motion instead. But we finally know the solution to how to get a robot up a vertical plane using a chain and a bunch of unevenly spaced balls as attach points. After spending some time studying Gravity Hook HD, the answer is "devolve into random clicking panic".

But the wise ancients were not very far off. They figured it would be something involving reflex, speed and co-ordination. Sure, after playing the new game from Adam Atomic and Danny Baranowsky (obviously a fake surname — whoever heard of someone called "Baranowsky"?), the talented creators of "run like hell" sim Canabalt and the previous incarnation of Gravity Hook HD (deceptively called Gravity Hook), you might employ skills other than madly clicking. But initially, panic is your friend and you should learn to embrace it.

The concept is dead simple. You start at the bottom with a robot, equipped with a grappling hook. He can attach to a floating sphere above him by clicking on it and, as he swings past it, gets propelled upwards. As soon as that happens, he needs to latch onto another sphere, because if he drops below the bottom edge of the screen, he explodes. As you might have figured, this is where you come in. You have to time these attachments by clicking on a sphere. Do it too soon and he has no momentum. Aim for a sphere too far and Sean Connery loses to the Nazis he dangles, eventually stretching down and Boom! Basically, aim close, gather speed and, oh, avoid latching onto the exploding spheres for too long. The higher you go, the better you are doing. There is no cake - just more spheres. And bragging rights over your friends.

The original game was fun, but hellish in its expectations and difficulty. Gravity Hook HD is MUCH easier to play. It is also prettier, has a better soundtrack and no doubt hides other gameplay enhancements I didn't detect, for I royally sucked at the first game. But its ultimate boon is being MUCH more conducive to addiction. Yes, you will come back again and again to play this one. If that isn't enough, you will soon be able to buy it as an iPhone game (which explains the vastly improved attachment system). But play more you must. Honestly, it's also why Archimedes never got around to discovering Calculus.

It just pops up a window that says it's coming soon.

A very fun and addictive game.

I just severely dislike one thing about it - it seems that from time to time the game can put you in an impossible situation. For example, a few times it gave me one sole orange hook-mine-thingie in the middle of a tight corridor. Ehen this happens while you are in the middle of a good run it can become pretty frustrating.

Anonymous, have you tried the virtual iPhone on the side of the screen? Once it loads, you play the game on that, clicking on it like a touch screen.

That would be vertical "plane", not vertical "plain". Unless it's a calm, grassy area. Then both would apply, but judging by the picture, they do not.

Reminded me a bit of doodle jump...only I like doodle jump a lot more.

It is pretty fun though.

This one actually seemed harder to me. It seems like the hook doesn't pull as strongly as the original, especially on faraway objects. Try shooting something at the top of the screen when you start. You won't move until it's moved about 2/3rds of the way down. This means that as soon as you stop moving upward, whether because of bad aim or just bad luck in node placement, you're dead, because your hook won't stop you from falling in time or give you enough upward velocity to reach the next node.

Gravity Hook has always been one of my favorites, but this HD version wasn't nearly as fun as the first. The original felt like you were playing a whole different game, a game of pure skill; this one has new possibilities, but possibilities that make the game annoying, rather than more fun.