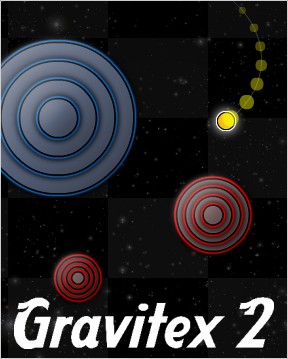 Fly me to the moon, and let me adjust my pitch and force to ricochet around the stars... let me pick up coins scattered around things that look sorta like Mars... in other words... it's Gravitex 2 from KChamp! It's a premise that not even ol' Blue Eyes himself would have been able to resist, since everyone knows he was a sucker for physics puzzles with level editors. True story and not in any way made up to facilitate a lame song joke. Honest!

The concept is simple. You play a shining, heroic yellow ball who launches through space and collects the various coins peppered throughout the game's 100 levels. To do this, you'll need to use the [Left] and [Right] arrow keys to set your angle, and press [Up] or [Down] to adjust your force, all of which can be seen in the panel at the bottom of the screen. (Alternately, if the [arrow] keys aren't your thing, you can type in these numbers manually in their respective boxes, or drag the gauges with your mouse.) Once you're satisfied, it's time to hit the [Space] bar to fly towards the goal point in each stage. Of course, nobody ever said gravity was easy to deal with. The bigger the object, the stronger the pull it'll have, and the more force you'll need to be able to break free, rather than smashing into it, thus putting an early end to your lucrative career in space coin scavenging. You'll encounter a number of obstacles, such as red planets that repel you and blue planets that will draw you in.

The downside is that "mastering" the controls mostly comes down to trial and error for every level, since with no penalty for restarting you could just slowly increment the values of your power and angle until you get it perfect. The game also runs out of toys to show you early on, so while later levels are larger, certainly, and much more complex, you're never really going to be surprised. Oh, is it a bigger red planet already, darling? Just compensate with the angle again, there's a good muffin.

But Gravitex 2 is worth a look both for its clever puzzles and its pretty little physics engine. Watching your golden avatar soar magnificently through space like some heavenly Skittle and perfectly collect every coin before plunking neatly into the exit is very satisfying indeed. Think the levels are too fiddly? Well, why not make your own? While it might require a lot more thought than other level editors, the physics behind this one means you can make some genuinely fiendish stages if you're willing to put in the time, effort, and little blue planets. After all, it's not the size of your gravitational pull that matters. It's what you do with it that counts.

This isn't a very good puzzle game. There's no "a-ha!" moment. It feels like you're just adjusting a line until it bends the right way.

Think of it as the opposite of Auditorium, in a fashion - instead of adjusting points of forces to make particles go the right way, you're, well, gently adjusting the initial conditions of a particle until its voyage bends the right way.

Except the problem is, where Auditorium had this nice, constant tweaking - gently coaxing the particles into just the right conditions, bending them just so, Gravitex 2 works on trial and error. Which, well, isn't very fun.

The heck with them. If there is no music volume control they have my interest for 5 seconds. End of fascination.

Wow, what a disappointment. I thought this would be fun, but there really isn't any puzzle to this at all. :-(

Just shootin' orbs at random blobs, hoping to guess the right angle/power combo. it's like a pixel-hunters worse nightmare!

For some reason, the controls would randomly start increasing or decreasing after I attempted a shot. It's really hard to control a game when the power and angle keep fluctuating.

Late to the party, I know, but I'm catching up after a prolonged internet outage.

I'm not going to be quite as hard on this game as others have. While I admit it's not nearly as engaging as other games in this genre (Spaced Penguin, anyone?), it's certainly worth a short while of your time. The puzzles can be challenging and you simply must admit that there's a slight tingle in the spine when you happen to find that magical combo of angle and power that nets you all three coins and a "nothin' but net" swoosh into the exit.

There was no way I was gonna make it through 100 levels, though. Not enough variation. Adding some new elements to change up the gameplay would be a great addition.

the solution to this is 296angle 100power