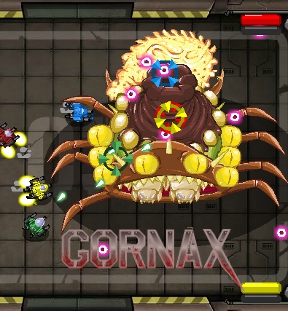 Gornax, the freakish brainchild of Berzerk Studio and a 48 hour Game Jam deadline, is kind of a trip. The arena shooter has you and up to three other friends (or CPU controlled squadmates) battling the titular ginormous mutant crab beast for the amusement of a television audience. Why? Because ratings that's why, and you're already overthinking it. Aim with the mouse (you'll shoot automatically) and left-click or hit [spacebar] to dash, while using [WASD] or the [arrow] keys to move around. Do your best to take out Gornax before he takes you out, dodging all his attacks and nabbing power-ups to deal more damage.

And that's... pretty much it. It's an action-packed game filled with projectiles, roaring, and testosterone. Considering its short development period, Gornax is actually pretty fun and it looks great too, though playing solo often means your AI-controlled teammates seem determined to steal every power-up and health pack. Ultimately, however, it sort of feels more conceptual than a full game, and it's the sort of tongue-in-cheek idea you'd love to see fleshed out more. Come on, a reality show where mercs in power armor take down enormous angry mutant beasts? It's like what you'd get if you made David Wong rewrite running man. With a few upgrades and different creatures, Gornax would have gone straight from "simple but fun" into "an absolute blast", but as it stands, it's still worth checking out to get in touch with your inner plasma-torch wielding smart-alec mercenary for a while.

So as long as I do enough damage I can die and wait for the others to kill him, then respwan in the free for all and win.... Sure.

This game is so freaking metal.