The game of golf is many things to many people. It's an ancient game with a diverse legacy, with variations spanning different nations and empires all throughout history. It's a favorite sport of business professionals looking to blow off steam. Its fans clap really daintily. But if there's one thing everyone agrees on, it's that it's really hard. And Dakina Games wants to bring some of that challenge on home to you with their puzzle game, appropriately enough entitled Golf is Hard. (And if you don't want it brought on home, but rather to restaurants and workplaces, it's also available on iOS and Android devices.) Although we get the feeling that these particular links miiiight be a bit more challenging than usual. Because on this course, walking on all of that brilliant green, perfectly trimmed grass is strictly verboten... if your ball doesn't make it into the hole from your first shot, you'll have to fire off from the tee again and again until you make it. This is also the only golf course we know of where you'll have to hit balls up cliffs or onto tiny islands in the middle of water hazards. Just click or tap to choose the angle of your shot and your power, and if you aren't too thwarted by the challenges and perils of the green, maybe you'll get the ball in the hole! Golf is Hard is a silly, irreverent, one-button take on the game of golf, and while it may, indeed, be hard, it's that special kind of hard that encourages you to just keep trying. 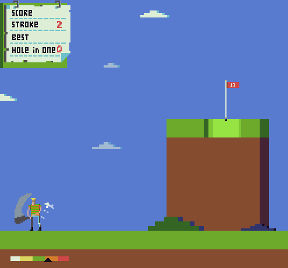 Controlwise, Golf is Hard behaves pretty much exactly like you'd expect a virtual golf game to. The strength of your swing and angle of your shot are determined entirely by timing, and how good you are at stopping little waving arrows exactly where you want them. It may not be a particularly precise method of control, but it's all part of the game's one-button charm. Whenever you miss a hole, however, the game is kind enough to show you the angle of your last shot so you can use it as a reference. Although challenging, the game usually won't ask you to hit the ball DIRECTLY into the hole; most holes are flanked by slopes, which you can send your ball rolling down to gently land in the cup. As the game goes on, the holes do get increasingly ridiculous and un-golf-course-like. In addition to being delightfully giggle-worthy, these really do make you grateful that you have some leeway in where you can land your ball! But none of these holes are very long, meaning the inevitable shot after shot you'll have to make to sink your putt never gets too frustrating. The only real gripe these constant retries bring is that, if your ball rolls to a stop on the green rather than splashing in the water or rolling off a cliff, you'll have to manually hit the "retry" button to go again. Golf is Hard. It's also simple. And no matter how hard it is, its simplicity will have you swinging away until finally, finally, that little ball meets with that hole.

Yep, the games registers single clicks as double at times - though not too often.

Nice little game - though the title is thoroughly misleading: golf IS a hard game in real life - but this is one of the easiest golfing games I remember ever playing. Not necessarily a problem of course - after all, it's supposed to be a casual game - and the difficulty level is just perfect for one.

Could have a little more levels. Took me about 5 minutes to clear all the levels :(