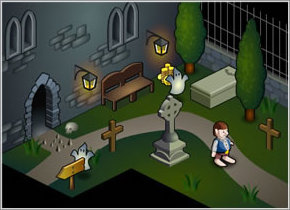 Halloween is just around the corner, and Gold Yard is a great little Flash adventure game to help get in the spirit of the season. Sporting an isometric view that simulates a 3D perspective, this game puts you in the character of a large-footed Hobbit trying to escape alive from a graveyard. Using the arrow keys on the keyboard for movement, make your way around the maze of rooms and environments to collect gold, find keys, solve puzzles and avoid being killed by the ghosts and monsters.

Beginning as an experimental project in his spare time, Francesco Maisto eventually built it into a fully playable and beautiful looking Flash game, even using 3D models as the basis for much of the game's graphical elements. An excellent game from a very talented Flash artist/game designer.

how do you get the word "isometric"? iso is a image file and metric is a system of measurement...
On a more purposful note, wierd game... there is no red key tho... i searched every room

isometric
Isometric is a term often used in the industry to describe games that have a fixed-view perspective, or uniformity ("iso") in dimensions ("metric").
Don't blame me, it's a kind of misnomer, I know. I didn't make it up. =)
Thanks, as always for your feedback. Oh, and I have no idea about the red key. =p

Isometric implies a lack of foreshortening and vanishing point, at least on the "ground" plane. So, objects don't get smaller as they get farther away, and their height is uniform anywhere in the image/map.

I think that they should have 'lives' because I got to the well and died. This game isn't good enough to replay all those times.

The link appears no longer to be working...

Hi,
I'm writing to say that Gold Yard did re-surface, you can now find it at the following address: Gold Yard.
It looks quite old-school now that the Flash game scene has moved on so much, but I hope people can still enjoy it!
Thanks,

Just to correct Jake, technically, the Isometric transform implies constant foreshortening not a lack of it.