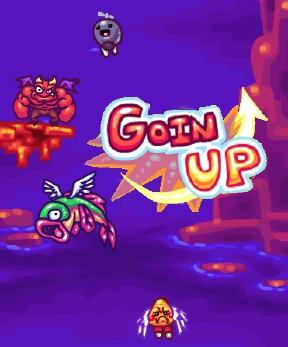 Goin Up is a new vertical-scrolling arcade platformer by Komix. Well... when I say "new", I guess I mean "recent" more than "novel". In truth, its gameplay feels more like a mish-mash remix of the mechanics of other releases than its own creation. However, what Goin Up lacks in innovation, it more than makes up for with style. After all, if I'm going to be steering my player-character into bombs to be propelled higher for the hundredth time, those bombs had better be darn pretty. And well... they are.

Controlled with either the mouse or the keyboard, your character, the demonic Mr. Rufus starts at the bottom of a large pit. With a click of the mouse or a hit of the [spacebar], you leap into the air, with another click/hit giving you a double jump, or a wall jump should you find a place to cling. Land on platforms or bounce off of enemies to gain upward momentum, but hitting a spiked ball or a regular enemy from below will cost you health. The higher you go and the more enemies you bloodily bash, the more experience you earn and the more "skulls" you get. These can be spent at the store for various (much needed) upgrades. These include health, jumping abilities, blasting bombs, accelerating rockets, shocking lightning bolts, and invincibility stars, as well as different "skins" for the the player character. You'll probably have to play through a couple of times before getting the hang of it, but it's worth sticking to it. There appears to be no end to the game, so the only question to answer is the one that plagued Meth and Red: How High?

Goin Up is a pretty clear clone of Doodle Jump. However, it is a clone done well, with a nice touch of the launch genre thrown in for good measure. While I will say that its upgrades need to be lower in price, and that the game certainly won't win any awards for most intuitive wall-jumping mechanics, the game is enjoyable enough to play. The real attraction for Goin Up should be Gonzossm's gorgeously twisted artwork. Aesthetics can't make a bad game good, but it can make you more willing to forgive the occasional glitch. Such is the case here: I loved playing "spot the reference" for each of the characters I stomped on. Admittedly, those who don't know their creepers from their Battletoads probably won't get much from it, and some of the more esoteric creatures do require a PhD in Newgrounds lore to interpret. Still, from the stylish enemy caricatures to the elaborate backgrounds, Goin Up is a visual treat. While one may end up hoping gameplay would be as new as the art, all in all, Goin Up is goin' to give you a good time.

Toss the turtle was good, and im happy this came with more cameos (including does japanese ones) like Scout (TF2), Creeper (Minecraft :D) and Dad (Newgrounds).