Greetings, Space Cadets! Are you ready to protect and glork whatever darn small hunk of rock we at the academy send you out to protect? Are you ready to blast invaders of all shapes and sizes? Are you ready to collect enough crackers to pay off your tuition? Are you ready to have amusing conversations with your talking backpack following your inevitable demise at the hands of Braindeevils, Groinx, Blurstebeasts, and that stupid invincible magic robot? Well, then Glorkian Warrior: The Trials of Glork, also available for iOS, is the game for you! A James Kochalka/Pixeljam joint production, Glorkian Warrior gives you just the right mix of retro-shooter arcade action, platform stomping, and Saturday Morning Cartoon, now for your home Magnaglork computer screen terminal! Move with [A] and [D] or the left and right [arrow] keys, and jump with [X], [Z], [W], or the up [arrow]. Your backpack will automatically fire your standard weapon as you dodge enemy attacks, trying to keep your heart meter about zero. Watch out for slightly larger enemies in each wave: blasting them will drop new weapons and power-ups. Blasted creatures may also drop Space Crackers, which you will need to collect to unlock new features in the game. Also, watch out for the Slurkers traisping underfoot. They can't hurt you by touching, but their flames can cause quite the hot foot. It's best to give 'em the old hop-and-bop treatment when you can. Also, watch out for Zoe and Chloe, two battle-suited lady aliens, who will grant you Bonus Crackers for completing missions. Earn 20,000 crackers total and, well, we'll all be very impressed at your tenacity. 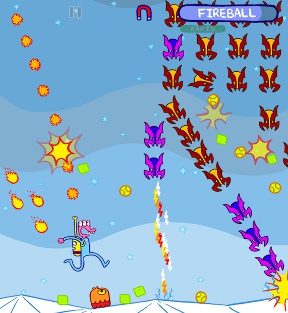 Glorkian Warrior: The Trials of Glork is a perfect example of a collaboration between awesome creators turning out exactly as awesome as it should be. First, you have Kolchaka, who has always had that rare talent of writing and drawing "silly" in a way that's incredibly smart, and delivering works that hit the target audience of "all ages" for the same reason. There's no sneering or cynicism to be found in his art or dialogue: just a goofy tale about an alien and a talking backpack, neither of who are entirely aware of the situation. Hilarity definitely ensues. Certainly, there's only so many post-fight cut-scenes to watch and unlockable comics to earn, but there are more than you'd expect and they don't get old. If you wanted to make a shooter that plays like a living cartoon, you couldn't be a better co-author.

And then there's Pixeljam, a group of developers that have shown time and time again that they know how to make retro ideas seem new, and new ideas feel retro. Whether they're making a Dino Run or running over pedestrians in a Pizza City, they're a name we trust in arcade action, and here they do not disappoint. The keyboard/controller is a much more natural fit for the intense action than a touch-screen, and the variety of monsters and flight patterns provides nearly endless combinations of giddy fun. The challenge level is definitely old-school (I have no shame in keeping the difficulty level firmly on "easy"), and you'll always seem to run out of a power-up when a Boss decides to show up, yes, but that is balanced by new elements unlocked at just the right rate to keep you addicted. Glorkian Warrior: The Trials of Glork delivers the amount of fun that all casual games should seek to deliver. It is bright, bouncy, mindless, and completely unashamed of it, like a pair of kids pretending that cardboard tubes are light sabers. Those who like sci-fi shenanigans, Galaxian-style gameplay, and protagonists with a non-standard amount of eyes will be replaying the glork out of it.

Is this any different from the iOS release in March?