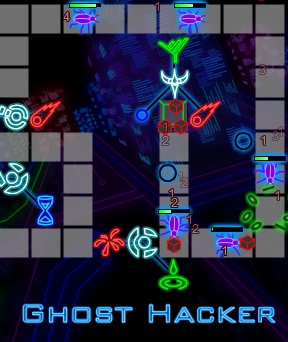 You may be disappointed to learn that Ghost Hacker by CoreSector is not a game where you hack ghosts. But you should cheer up, because it is a great tower defense game where you are a ghost (sorta) who hacks things (sorta, again). You are Alpha... not that you can remember much about yourself, but the woman who serves as your contact informs you that you were a human who volunteered to undergo a process she calls "digitizing". It seems cyberspace is under attack by rogue AI, and the only thing fast enough to deal with them is a human AI. But is everything as it seems? Can you really trust the shadowy, unlikable lady doctor with the supervillain eyewear who barks orders at you between stages? Sounds like a great idea to us!

In each level, your goal is to defend your data cores against the waves of incoming enemies. You start off with only a few tower types, and each can only be placed in certain locations; once placed, you can add coloured upgrades to them that will affect things like splash damage, ricochet, or even slow the bad guys temporarily. If you're looking for a bit of hands-on destruction you also have scripts at your disposal, which not only have various useful effects, but return all your investment after being activated. All of this costs memory, the cyberspace equivalent of the almighty dollar, which is gained by defeating enemies.

You have ten data cores, and if all of them are carried off, it's game over. If you kill an enemy carrying a core, the core will slowly begin to slide back towards the cluster. As you progress, you'll gain additional towers, scripts, and upgrades to use, as well as more slots to put them in. Since different enemies have different powers and weaknesses, you'll want to give some thought as to what you bring to the table if you don't want the enemy forces to hold you down and take all your lunch money within five seconds of clicking "start". 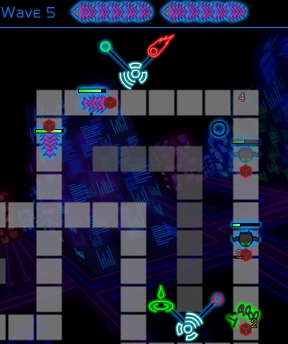 Analysis: If you liked the upgrades concept behind Gemcraft, and the varied enemies of Cursed Treasure, then Ghost Hacker is probably going to be the porridge that was juuuuuuust right for you. Although it isn't as complex as either title, Ghost Hacker still wins a lot of points for managing to add just enough strategic elements so things don't get repetitive, and not overcomplicating itself so you feel like you need a flowchart and a business degree to find it entertaining. I have also been informed that the story is rather "Ghost in the Shell"-sy, although I cannot confirm or deny this as I remain woefully ignorant of the source material. What I can tell you is that, while probably a little predictable, the story is still a welcome addition to the game, and provides some nice incentive to keep playing beyond the simple thrill of getting new upgrades and towers to play with.

Although some of the levels can be challenging, Ghost Hacker is not what you might call particularly difficult. It's just so forgiving and easy to pick up and play that even a defeat is a minor setback. This isn't necessarily a bad thing. You'll probably know very early on within a stage if you've made a critical error in choosing your arsenal, so being able to hop out and start all over with the right tools for the job makes things a lot less frustrating. Especially since the various speeds you can swap between at a click means zipping through stages is a breeze with proper artillery. You can even drag towers you've already placed and upgraded anywhere on the map to reposition them at no cost. It's a bit like being visiting a friend who keeps fussing over you. "Everything okay? You comfortable? You can change the channel if you like, it's cool, I wasn't watching that. Do you want some cookies or a new virus to riddle your foes with debilitating disease?"

While not as brain-devouringly addictive as some defense games can potentially be, Ghost Hacker is still an extremely solid and enjoyable title. A little more fleshing out with a skill tree or something similar would have added an element of choice and feeling of freedom that might have provided that immovable hook, but what's there is still a great example of the genre.

Am I the only one who sent this in?

It won't load, I'm getting a blank screen. I'm using the latest version of flash so what gives?

Sorry about that bug. It seems to happen when you reload the game the second time.

I'll be releasing a fixed version soon for that but in the meantime I think you can fix it by clearing your Temporary Internet Files (Tools->Internet Options->Delete...). The save games should be unaffected.

Anyways, thanks for adding the game here. I'm a big fan of this site and it's an honor to finally see one of my games here.

It has been so long since I've played a tower defense game that didn't leave me wishing it was more fleshed out. I love the customizing system, then variety of enemies and upgrades, then way the money works, everything.
Truly great job. I am currently trying to get the little cube to show up next to every level, and the difficulty is pretty much perfect! Figuring out that level with the healing dudes in that little ring was like a puzzle more than a TD game. Keep up the great work!

Flawless tower defense game. I have nothing but good impressions on this one. The design is cool, the difficulty level is perfect, and so on. Also, it is presumably better programmed than your average flash game, because it never really slows down on my computer, whereas a lot of games do. Great work!

This TD is awesome! Totally agree with said by JIGuest and Mrc before me.

Thanks for fixing the issue so quickly. I really like TD games and this one has a pretty original concept. Reminds me of Tron :)

One of few TD games that I've ever actually beaten. A few of the levels provided a bit of a challenge, and what was particularly nice was the way you often had to strategically move towers instead of just setting stuff down and forgetting. My only qualm was that the last level was FAR too easy, even without using the brute force script.

The entire level could be easily finished by just adding a RGB sentry with splash, fork and the optimizer whenever you can. Nothing even makes it past the first curve if you do that.

Some of the levels were really neat, like the one with all the healers in the ring or the one with the enemies that crawled over the corrupted squares, and one particular one (the one with a short track, a lot of reapers and some stealth and super-users) drove me nuts because I just could not stop them from taking at least one. I eventually cheated and went back with the slow tower, and even that caused me some trouble.

The only thing I was sad about was that I didn't get a special surprise for winning with all the cubes intact. Other than that, fantastic!

This may be the tower defense game I've enjoyed most in the last year. Very fun.

I do have a couple of balance comments. I don't much mind that there are good and bad combinations of upgrades, since it seems like some of the skill in the game is working that out. But as far as I can tell, a lot of the base tower types aren't very useful, which is disappointing.

It seems like Sentry, Ping, and the slow tower are so much superior to the rest that it never makes sense to use anything else (besides Scanner when you have to due to stealthed enemies). Among other things, if the DPS stat is to be believed, Ping and Sentry are the highest DPS towers in addition to their incredibly good special effects and utility against difficult enemies. Particularly, it would be great if the high-end towers, like the two different kinds of laser towers, had more of a niche in the game.

Ah, agreed Epoch, I totally forgot that I never once used the beam or laser towers. I tried each and they just never seemed to be worth it for me. Sure you can upgrade them four times, but it still seemed like the slow and sentry towers were pretty much essential.