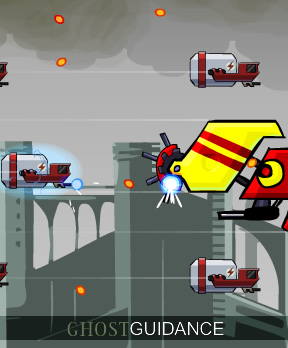 When an artificial intelligence escapes from its laboratory and flies out against military forces in a fight to survive, Ghost Guidance inadvertently gives us something the world has never seen before: a SHMUP story that makes sense!

The usual SHMUP (SHoot eM UP) motivation usually follows the lines of massive armada versus your hideously overpowered ship. Nobody has played one of these games and not considered if this would have been a war at all if your side only had two or three more of these powerful craft. But Ghost Guidance turns the idea on its head. First, you do not have a craft to speak of. Instead, as a floating AI 'virus' you can invade the guidance systems of a ship, essentially taking over control of its firing and navigation systems. This is a useful ability as the military will try and shoot you out of the sky before you can make it to safety. Every time they blow up the ship you possessed, you can leapfrog into another craft—even missiles.

Ghost Guidance is certainly shaking the genre up with these new approaches, but unfortunately it doesn't hold onto some other SHMUP traditions that would suit it perfectly. There are very few enemy types and no power-ups to speak of. In fact, with the exception of boss fights, you can simply dodge incoming attacks most of the time. It also lacks the pattern-spotting tradition of the genre: bullets are slow and infrequent (yet at times ridiculously everywhere) and while boss ships have sequences, they are hardly a challenge. With the last boss you hardly need to move at all. A rudimentary survival mode adds to the challenge quota, but it lacks a smack of adrenaline.

But these shortcomings makes Ghost Guidance feel like a concept or some kind of prequel teaser. It adds some interesting adjustments to SHMUP mechanics and fans should be keen to see what the developers come up with next. This spark of ingenuity is what props Ghost Guidance up and gets it featured here.

I really liked this one. Basically it is a SHMUP version of Shiny's Messiah.

Superb game. Love the idea of infecting(or possessing) a ship. I found the smaller ship to be the best. The developer needs to run with this idea and get a sequel going asap. More levels, more ships.

Yeah, this one does sort of weirdly flip-flop between yawn-inducingly easy and "where am I supposed to put the ship where there are more than 2 contiguous pixels of the screen not occupied by enemy fire" impossible. The second boss just doesn't seem to fit much, since it's so much more difficult than everything that came before.

Yeap, definetly more ships! I accidentally possesed a missle at the last stage O_o I had no idea that was possible... Good at avoiding fire and fun but useless..

I thought it was okay, for all of the reasons mentioned. However. a sequel could be phenomenal. I definitely want to see more from this game

This game is far too short and proof-of-concept-y. It would be _amazing_ if they came out with a full-content game based on this idea.

As with most games, I'd wish there was a genre cross over of some kind that helped develop the idea more. In this case, could not also have this be a platformer or sidescrolling shooter (not a shmup) with the energy as a little person or something GETTING to the ship? And then once its underground, getting away from things chasing it or defending its little crystal maze from mechanical invaders?

This game needs a pause. I was playing the challenge mode, and had beaten the final boss, and I had to suicide because I had to leave.

So is "shmup" an acronym which should be capitalized? I had always thought of it as a portmanteau. I think this is the first I have seen it as a selective initialization of "shoot 'em up" and not just a silly smooshing.

As much as I've nitpicked over gaming terminology on these forums before, I honestly can't think of a reason why it matters one way or the other.

Beautiful game! Fresh and fun but (like above comments) needs expansion. A sequel for this game is definitely in order and maybe a reworking of the enemy bullet system. Overall brief but enjoyable.

Nice concept, but a bit too short, and too few ship types.

I really liked this, and review really summed it up well.

I managed to tear through the game in the tinyest ship without much difficulty. I do like playing shmups so I'm used to having to play with one-hit deaths in mind, but giving the larger ships more armour is a great. It makes the game more accessible to the casual shmupper, and allows a bit of variance in your style of play.

The art & presentation are really nice, and the inertia of your fire as you move up/down, is a very welcome tweek on the traditional shmup format. While it isn't groundbreaking or a new idea, it's a nice touch that shows the author has really put thought into their game.

I hope there is a at least a sequel/spiritual successor to this game. A few more features (I'm thinking secondary weapons, some kind of power-ups or something to collect) and just more content (more ships, weapons, levels) would make an amazing game.