Are you too happy? When friends describe you, do they use such phrases as, "The life of the party," "a real ray of sunshine," or "an absolute treat?" Do you need more UNBRIDLED RAGE in your life? Then have we got the platform game for you! Geote is a game that wants to break you down and drink you sweet, sweet tears, but the hurt is so good. Like most brutally difficult games, it sounds simple enough on the surface. Heck, it even LOOKS simple, thanks to its minimalist aesthetic. You're a blue rectangle, controlled with [WASD], who absolutely cannot stand red squares. Aim with your mouse cursor and click to shoot and destroy all the red squares on the screen. And at first, that's all there is to it. But then the red rectangles start to get scared, and start to hide. And then they call on their friends, the spinning black triangles, for backup... Soon you're pulling off mid-air dodges around flying spikes, firing rapidly into the air, and pogo-ing on top of conveyor belts like a caffeinated kangaroo. It isn't for the faint of heart, but if you're looking for that special brand of delicious anger only a maddening platforming game can cause, Geote welcomes all challengers! 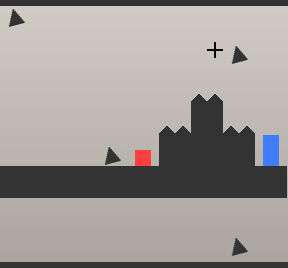 Visually, Geote takes a fairly simple and utilitarian approach, but it definitely works in the game's favor. Precision is of the utmost importance in these kinds of blisteringly hard games, and the simple graphical design makes it easy to assess the hazards in front of you at a glance. No worrying about whether or not that spike is "just in the background" here! For a simple blue block, you have quite a lot of mobility, and can change directions on the fly and don't need to get a running start to perform a full jump. It's not quite kosher with the laws of physics, but allows the levels to have more exacting layouts as well as allowing the player a greater degree of control. Of course, the game isn't just about avoiding hazards, and having to aim and shoot to hit targets means the game actually requires a strong degree of coordination alongside raw reflexes.

But making a punishingly difficult game is ironically not hard; it's making one fair and satisfying that's important. Geote makes it clear what its hazards are, and its screen allows for a good view at what's coming up. Getting your keyboard and your mouse working in tandem makes you feel adaptive and powerful. But the timing on some of its moving obstacles sometimes feels off. While targets reset each time you fail a level, obstacles do not return to their original places, so there are times where it's possible to respawn on a level, only to die immediately because a moving spike passes through you. Some spikes also move slightly out of sync with one another, meaning you'll have to wait to find a proper opening. Dying has no penalty other than resetting the targets and making you instantly respawn, but it does feel a little cheap, since the game rewards you with high rankings when you finish a level quickly. Overall, though, the level layouts themselves are quite cleverly sadistic. Geote is the gaming equivalent of Eggs Benedict: Probably bad for your blood pressure, but once in a while, it's the exact sort of indulgence you need.

I got all the way to level 16 before raging. Or rather before ragequitting, I was sort of raging before that level.