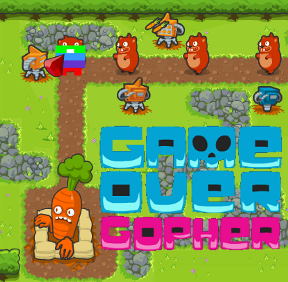 The following is a reader review submitted by Dsrtrosy: Game Over Gopher by the edugame makers at the New Mexico State University Learning Games Lab is a seriously cute, seriously fun tower defense game. Your job is to defend the garden's one and only carrot from marauding gophers... not by killing them, but by feeding them until they explode into rainbows! Yep, rainbows.

At the start of most levels, you'll need to use basic graphing skills and coordinates to click and figure out where the gophers will be coming from. You'll be given a graph and a pair of coordinates that reveal a location on it, and clicking on the proper spot will plot your path. Drag towers and launchers to points along the path where they'll be able to reach the gophers that will trundle towards the carrot. Towers cost rubies, however, which you'll need to mouse over when they drop from a rainbow'd enemy. Of course, if you need more rubies faster, you can place special Ruby Drills at certain points on the graph and they'll periodically spit out a gem if you've placed them correctly... just look at the numbers below the drill icon before you place, and use the graph to figure out where they belong. Keep an eye on the action, since an un-munched carrot is the best kind of carrot.

As you progress, you get more and more goodies, from carrot launchers to iceberg lettuce (which, you guessed it, freezes gophers as they eat). The towers are minimally upgradable, but what makes this game special is the truly fun way in which junior high graphing skills are brought to bear on gameplay. An important aspect of your strategy is having enough rubies to pay for new towers, upgrades, bombs and more. Ruby drills are free, but have to be placed on specific coordinates on the graph. If you don't keep track of the next available drill, you might find yourself out of rubies, and once an area has been mined completely, the drills disappear.

The strategy in the game isn't difficult, but the cuteness plays a major role. Despite the inability to speed the gophers up, you can send a new wave early and increase the challenge in that way. And it has a nice difficulty curve, with more and tougher waves in each level, as well as some pretty funny boss gophers. While this might be a better game for kids, I admit it quenched my thirst for something new in the TD genre. It's easily worth a lunchtime game break.

Hurray for math! I do wish there were a mouse-over to count the vegetable 'damage' on individual gophers. The math-iest part of tower defense games is determining tower placement, and how to maximize damage. A visual of how many veggies each gopher's eating over time would have been even cooler.

I bored-quit after I noticed you can win all levels by putting only beet traps and waiting to call the next wave. Game's broken!

I don't normally play tower defense games, but this seemed like a nice introduction to the genre. Sometimes a kids' game is exactly what an adult needs.

And as a former student of university-level mathematics, I definitely approve of how the game not only teaches the co-ordinate system, but subtly introduces the concept of vectors in the bonus games.

An excellent game for its intended purpose - I've little doubt that it will help kids learn the coordinate system more easily.

Nice variation with the -+navigation.
Rather easy, and quite long before difficulty ramps up.

Unfortunately:
The game graphics gets corrupted visually at some level starts (blocks missing leaving holes) and only a page reload fixes it.

Also:
Even at beginning of levels when it should be fast.. after a couple of levels the graphics gets slower and slower. So there is something not optimal.
(It might go unnoticed on faster computers).

Started playing Game Over Gopher for the first time. Reminds me a bit of Plants vs Zombies. Seems like fun.

I got past Level 2 pretty easily.