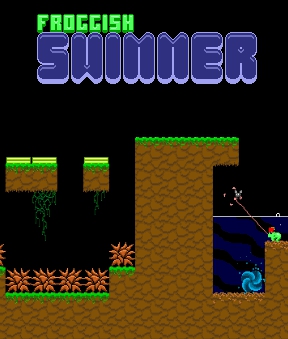 It's surprising that you don't see more 'one button' games. With the age of touch screens upon us, it's likely to be a booming genre soon, but currently they only appear every now and then. Fortunately each one has a fresh take on the concept; perhaps this is why many developer steer clear of one button games, as they require some lateral game design that seems so obvious once you see it in action. Like, what is so hard about coming up with a game about moving a frog through murky levels using mouse clicks? No idea, but Remar Games and Ludosity's action arcade game Froggish Swimmer was first.

Presented in crispy pixel graphics and a soundtrack reminiscent of truly old console gaming, Froggish Swimmer is a fiendish little offering where you guide your frog towards a whirlpool. In his way are various obstacles, some to be avoided, others to be bombed away. The frog responds to your cursor; a click will see it jump towards the mouse's virtual appendage. But its leaps are limited, so you need several clicks to have him hop or swim along. On occasion you can snap up flies and dragonflies - the latter extends your tongue's reach, adding another dimension to the puzzles.

Each level is a challenge, involving dexterity and puzzle-solving, with the added pressure of losing points for each click. On top of that Froggish Swimmer serves up challenges related to its own physics. It is possible, using timely clicks, to boost your frog out of the water at high speed or get a higher bounce on top of water surfaces. The later areas use this quite a lot and it's not easy. There are Five areas, each giving you a click count after completion, so you can replay each one and refine your skill. It might be necessary, since the game starts becoming aggressively demanding on your dexterity and clicking prowess towards the end of the third area.

This is a one button game like no other, with an eventual demand on skill and timing well beyond most platform games. That also makes it a game you'll likely love or hate. And let the score posting begin!

Argh. There's no need for the bombs to explode when you hit the walls. They shouldn't explode unless you toss them (a requirement in most places anyway). It's just annoying.

This is not a one-button game!
Mouse position is important, and you need to shift-click to capture bugs.