In Freeway Fury 2 and the original, you controlled a man who beat up people and aliens and drove cars very fast. In Freeway Fury 3, the latest in the arcade driving series from Serius Games, though, we dive in to the serious and complex motivations behind our protagonist. His hidden angst, his secret dreams and aspirations. Spoiler: Turns out he wants to beat people and aliens up and drive cars very fast. In addition speedboats, jets, and laser-spacecars. Okay, maybe complex is an exaggerated description of Freeway Fury-Dude's psyche. But as you're leaping from limo to semi to motorcycle to school bus, trying to stay one step in front of the law, you won't mind that Freeway Fury 3 keeps it simple. 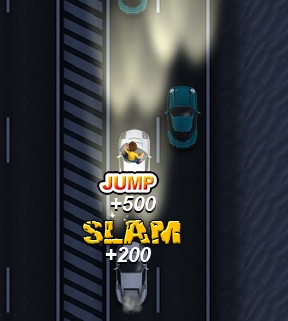 Gameplay is similar to previous installments. Move your car around the freeway using the [arrow] or [WASD} keys, trying to reach checkpoints before the timer runs out. Things are pretty crowded, so holding [Z] or [spacebar] will start a bullet-time mode where you climb on the roof of your car. Jump to a new one by aiming with the [arrow] keys (including diagonally), but watch out: if you miss, or take too much damage to the car you're currently driving, you're street pizza. Earn bonus points by jumping on strings of cars, crashing, grinding or disabling other cars, speeding face-first into oncoming traffic and other driving-school unapproved activities. Doing these tricks will also grant you some Nitrous Oxide which, when the up key is held, gives your car's a speed boost. New to this installment is the Fury meter, which will also fill as you accomplish tricks. Fill it up, and you'll enter Fury mode, where Nitro makes you go faster, tricks grant you more points, and, most importantly, if your car explodes, you'll be granted a last second chance to jump to a new one. There are three levels of 7 checkpoints apiece, leading up to an interstellar boss battle.

While Freeway Fury 2 was definitely a huge leap forward for this "Grand Theft Frogger" of a series, Freeway Fury 3 refines the experience. The Fury meter is a great inclusion for a game in which players deserved a little leeway for crashing their vehicles, and the somewhat confusing branching path system is gone, meaning that players won't have to be constantly restarting and replaying to see all of what Freeway Fury 3 has to offer. The lack of car health meters remains a bit of a strange omission, as well as the general finickiness concerning when others cars are in-range to be jumped on or not. But aside from these quibbles, Freeway Fury 3 is fast and furious fun and will be well received by anyone who's ever been frustrated by a morning commute.

Game is pretty easy until u reach the final boss.

Then the difficulty suddenly has a MASSIVE ramp, you're given almost no time to react to shots fired at you, almost nowhere to avoid them and have to contend with other ships trying to ram you all with so little health that you die within seconds.

Good luck trying to beat him.
My reactions weren't anywhere near fast enough.

I could survive thru the final boss (the shots have a simple pattern you can easily dodge, and the other ships are there to jump onto) and can even

Bring down all of the pulse guns

bring down the main laser

before time runs out. Maybe that's not what I'm supposed to do, but IDK what else to do.