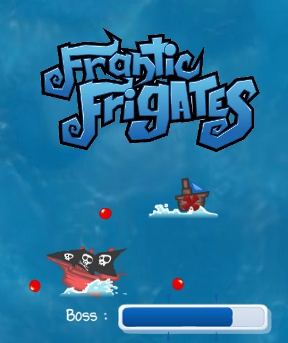 Ahoy ye barnacle-blistered land-lubbers, and welcome about the JayIsGames galleon! Today we be featurin' Frantic Frigates, a topdown action shooter from Berzerk Studio. Thar be rumors of sharks, pirates, and alien ghosts swarming the seas, and they've been leaving folk mighty groggy. Only ye and yer motley crew of constantly firin' cannoneers even stand a chance to calm the waters. Those wantin' for a treasure chest of frenzied fun will find it here, I swear by my tattoo.

Frantic Frigates is played largely with mouse movement. Your cursor is marked with an X and your ship will head towards it at a constant speed. Your ships fires its cannons automatically at a constant rate towards the nearest enemy. and there'll be a lot of them. Treasure chests and defeated enemies drop loot. Once picked up, the loot is used to purchase larger ships and better upgrades at the store, accessed with the [spacebar]. At the upper right is a meter that fills with each enemy defeated. Defeat enough and the boss battle begins. Achievements unlock more cash at the start of your next game. And if you want a little bonus cash from Captain Lachhh, I'd suggest moving to a new tab for a bit...

Casual shooters can get a little interchangeable, so it's nice to see a work like Frantic Frigates that willing to shake up the formula. Not everything it tries out works perfectly, but enough do to make a quite an enjoyable time. The interface of you-steer-CPU-shoots takes getting used to, but it streamlines gameplay and plays well into the concept that you are the captain of a ship who trusts his crew to man the cannon. Certainly, the later levels' bullet-hell elements wouldn't be so well integrated without it, especially the final boss. On the down side, restarting the game from scratch every time you lose feels like an artificial way to lengthen a short game, regardless of how much cash you're granted at the start. The game's willingness to shill for microtransaction advantages makes that design choice suspect at best. That said, overall, Frantic Frigates is a nifty piece of nautical action that has quite a bit of ch-ARR-m.

I mostly agree with the review, although I thought the purpose of starting money was to gradually lower the difficulty and give an incentive for achievements...

An easy 5 stars from me.

I do wish it were longer, but I appreciate a short game like this that lets me perfect my skills and my upgrade path from the beginning.

I'd like a sort of "pure" option where I get to start with $0.00, just as a challenge, but I'm addicted to restarting with a powered-up ship each time.

They could have been more inventive with the enemies and bosses, but this has a simple, classic feeling to it. I actually go "AARRRGH" when I get hit sometimes. Sweet game.

Enjoyed this game a lot until I got to end game, at that point it becomes about tedioum instead of fun, there simply isn't enough challenge when you final boss goes down to warrant trying for a highscore. As the game stands by itself, it's a lot of fun and took me three tries to get through it but the further draw (IE, the endless mode) could use a notch in difficulty to make it a little tedious when shooting for highscores. Some of the ones up there are ridiculous, after half hour play I was sitting at something like 50,000 when people have upwards of 200,000. Who wants to do that!

Does anyone know how to get the medal envolving Lachhh the Pirate? or the medal for Defeat the thunder?

This game was great.

To the poster above, the Thunder is the final boss ship. I assume you have to sign up for a third party offer to get the other medal. Personally, I am totally against things like that. They load their site down with ads everywhere and they still try to scam you out of money for a measly bonus in a Flash game.

Just wanted to add on to what I said. JIG is the only flash game site that I allow ads on. Every other Flash game site gets blocked. I do this because JIG actually writes decent reviews on everything they post. All the others seem to just dump things on their site, probably without asking for permission, too.

[Thank you for the support! Ad revenue is critical to our survival. Paying the review team is the site's largest expense, and it consumes most of our revenue each month. And we do communicate with developers and request permission to host games here at JIG. Thanks again, your support is very much appreciated! :) -Jay]

The Lachhh medal is found by clicking out of the game window. A pause screen with "Where on you?" will come up. Wait for a little bit and a pirate will show up and demand you get back to playing. Wait long enough and he will offer some free gold.

Anon: What Jay said! Thank you for supporting the site!

to the guest who asked about lachhhh the pirate you must click out of the screen (pausing it) then wait a while until a dude comes up. when he says "come on ill give you some money" or whatever it is, simply click back to the game
also "thunder" is the name of the fourth and final boss, the game says there are three bosses but once you defeat the third he starts flashing as all the bosses do once killed and becomes "thunder" a ghost ship that is quite difficult to kill without some of the upgrades

i cant seem to pause the game by clicking off the game window. ill never get the lachhh cash.

you have to right click to get lachhh the pirate from what i can tell, clicking off screen didn't work for me either

Is there a list of achievements somewhere? (not medals)

How I got the free gold from Lachhh the pirate:
1.Play game
2.Click on start menu button/windows key on keyboaard
It should work.