Frankenstein is a brand new work of interactive fiction written by Dave Morris and released using the inkle platform. Based on the original novel by Mary Shelley, this modern narrative weaves a captivating story that takes advantage the mobile platform to deliver a strong visual impact along with its interactive elements. You are both reader and player in this experience (though more the former than the latter), choosing directions for your character to take and shaping the narrative in ways that are both subtle and obvious. The end result is a visual and textual masterpiece that you will be thrilled to experience. 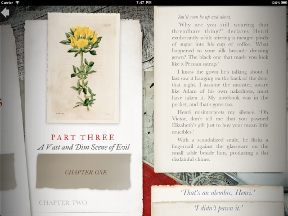 Reading/playing Frankenstein is similar to reading a book, and navigating the touch interface is as natural as shuffling papers on a desk. As you read the story, choices will appear on small slips of paper at the bottom of the screen. Pick the option you're most interested in seeing, then give it a tap to see what happens. The next portion of the tale immediately slides forward, pinning itself to the previous piece of parchment to form the next link in the continuing narrative.

The story begins in the late 18th century as Victor Frankenstein is about to complete his famous creation. The rest unfolds from there, following the events surrounding the creature's escape and beyond, including a time where you are the monster yourself. Instead of presenting binary decisions that paint obvious aberrations in the narrative, Frankenstein tends to employ more subtle strokes that shade events in a particular direction. Decisions still branch out like any choice-based narrative, but instead of hitting dead ends or meeting with formulaic outcomes, Frankenstein feels as if it customizes itself based on your preferences, making it more like a story that accepts user feedback than a traditional novel or game. 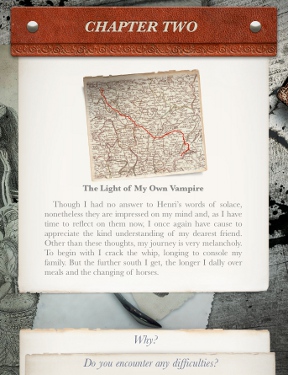 Analysis: Frankenstein represents what a novel might be if it were invented in the 21st century, utilizing modern technologies to produce a pleasing interface and a wonderful visual design without sacrificing the art of telling a story. The inkle team (which includes Joseph Humfrey and interactive fiction author Jon Ingold) wanted to do something different with the interactive narrative. The genre of Choose Your Own Adventure narratives, of which Frankenstein is certainly a member, usually features sets of choices that allow the reader to pick what happens next. See an option, make a decision, turn the page/click the link, then read the outcome. While there's no denying that can be a wild ride, it's more of a game than a story, as it's about the choices, not necessarily the plot. With Frankenstein, the story takes center stage. Instead of directing the plot you influence it. Even though the options are just as clearly laid out, the outcomes aren't as polarized, making this one of the most organic CYOA narratives so far.

There's a very fine literary line authors of text-based games have long been following, one that crosses philosophical territory on many occasions. Games are about interactivity, allowing players to make choices and experience outcomes. Literature is about telling a story, one where the author directs everything and the reader follows along. The latter allows for a more meaningful tale to be told, but when you're actually involved with a narrative, the experience can run more deeply. How can you take the emotional impact of a structured narrative and allow the player to interact? Can it be done without destroying the heart of either medium? Frankenstein takes a guided stab at the heart of those questions. It's more of a book than a game, but you can't deny the interactivity it presents, all without the heavy cost of losing a substantial story.

Leaving the philosophy aside, Frankenstein manages to provide a smooth, almost tactile user interface that looks phenomenal on the mobile screen. The artwork placed throughout the chapters is gorgeous and really adds to the atmosphere. There are even extras to peruse, including background behind the art as well as the original novel by Mary Shelley!

Frankenstein is being marketed as a new book app for tablets, the modern day evolution of the hardback novel. In the end, it absolutely succeeds at that, providing a strong and well written story that draws you in like a best seller, but sprinkling on just the right amount of interactivity to make it more personal. A great interface, a great story, and a great experience from beginning to end.

I haven't played this yet, but I wanted to mention that Jon Ingold is involved with the making of this game. People outside the interactive fiction community may not have heard of him, but he's done a bunch of really interesting IF games. On the strength of his involvement alone, I'm going to pick this up, even though $5 is pretty hefty for an iPod app.

Ack, should've read the whole article. Seriously, I am an Ingold fangirl, I guess.

Ingold has impressed me twice so far, first with Fail Safe (available on Jay Is Games), and second with All Roads which is free on his website (you need an interactive fiction player to run it, I suggest one called "Gargoyle"). Now if only I had one of these newfangled touch screen contraptions to try out this Frankenstein...