What's this? HopFrog's brought us this shiny and colorful exploration game with resource management and crafting elements! Thrown together in just a couple of weeks for the GMS2Jam, Forager has all the animation and sound effects you'd want to make for a thoroughly enjoyable gaming experience, and it's even procedurally-generated for maximum replayability. Explore the landscape, find resources, build facilities and learn to build new things! There are trees to harvest, stone and minerals to mine, treasure chests to find which give not just cash but your choice between permanent upgrades, and fish and herbs for replenishing your energy. Then build discharge stations to help you mine automatically! We thought more people deserved to hear about Forager, and we'd love to see what it could become with even more development! 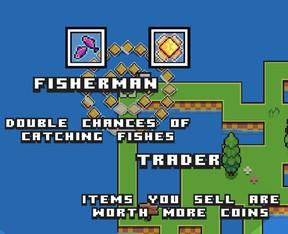 Explore using the [WASD] keys, aim using the mouse and use the left mouse button to interact and use items with the right. Your scrollwheel browses through your inventory, and [E] opens your build options. As you build facilities for the first time, new ones become available. There are no enemies; it's just you, your goal, resources and plenty of room to make stuff! Forager's one of those modest little retro games that grow on you, and you'll probably find the urge to go back and play it every so often. At review time there's no save feature, it gets a bit slow at times and there's a visual glitch that causes nearby items to occasionally disappear as you move around, but nothing that significantly hinders play. We still thought Forager was innovative, satisfying to play, and that you'd want to be alerted to this unique gaming experience!

Pretty huge bug when building rafts out into the ocean. You can get stuck way out there (far northwest corner) and the red raft icon is stuck on your cursor, but you cannot build any more rafts! Only escape possible is via teleportation. You can still build other items and click as normal, but never again build a raft! The red raft icon is stuck to my cursor for the whole rest of the game!

Is there any source of grey bricks besides the Market???

Thanks for reporting the raft glitch! Have you tried right-clicking away the red bridge mode your cursor was stuck on? Running out of building materials will also keep you from being able to build, and 'bridge construction mode' is a convenience to make it easy to build more than one of them, since usually one alone isn't going to do you much good. Right-click to go back to normal.

For the grey bricks,

did you mean Iron Ingots? Those are gained by smelting raw iron. Try throwing various items in there and see what you make!

Thanks for the tip on the steel.

Yes, I tried right clicking, and building something else then building a bridge again, etc. I was stuck with the red raft on my cursor for the whole game. Also I could not build another raft for the whole game. Other than that it was just a visual glitch - didn't prevent me from doing anything else. However I was not able to complete my insane quest to teleport across the whole sea in search of a secret island of sheep which I was convinced much exist!

This is a great game with some implementation problems which for me made it very trying. I found the controls too "slippery" - like Mario2 on ice the whole game. Moving with wasd was just debilitation. If not for teleportation I would have given up long before the end. Also for people playing without a mouse, the need to change items constantly was a pain in the neck. Every time you move the cursor down to select a new item, the screen slides down too.

Another issue I had was that the game window could not be resized so the bottom of the screen was permanently obscured by the Windows taskbar. I ended up having to Autohide the taskbar so I could select different items. Still, the taskbar had a tendency to pop up if I accidently moved the cursor too far down. I wish I could have just resized the game window to prevent this.

Another problem I had was that for a lot of the game I had no idea you could hold shift or control to choose half or all of your items. Around the time I started gathering items by the hundreds I just tried holding different keys in desperation until I stumbled upon this. Maybe a certain sign had this information - but several of the signs would not "read" when I walked up to them in the game (another bug?)

Another thing, not sure if this is a bug or not. I tried to get as many chests as I could from the golden statue, just pumping coins into it by the thousands. I was hoping that eventually I would have unlocked all of the "upgrades." I kept track of which upgrades I never chose. But eventually, I just got a chest which dumped out a few dozen coins - meagre return for the hundreds that the chest cost me - and didn't get any more upgrade options, although there were still some upgrades I had never chosen. It was a little disappointing.

Overall I really enjoyed the idea and graphics in this game. I just wish it had been designed with more simplicity. It has a nice look to it, like NES Zelda, but it moves and slides around like Web 2.0. I wish it had played more like an NES game. Needs better controls and no slippery-screen.

Otherwise, a fun experimentation/exploration game with some idle elements (I'll admit I just set up 6 coin machines and walked away for a while when I got tired of the controls towards the end.) Great effort considering the time constraint. I hope the author makes a "new and improved" version that addresses some of the issues above - if so I would play again.

Indeed, the very first thing I did when the game started was to fullscreen it (Alt+Enter) to get around the fixed window size, which may or may not have caused some mouse issues later on.

If I recall correctly, I've seen signs describing these controls:

but no signs describing number keys, or the E key, unless I've missed them (and the signs in this game are read-once - if you activate one off-screen you never get another chance to reread it)

WASD was okay for me (I've played worse), but the mouse control was a nightmare. Setting up fish traps all in a row was a bad idea. I couldn't click them because the cursor would just skip right over them. I managed to place a single bridge tile aligned to half-blocks, making it both useless and unremovable.

Mining and gathering takes a little too long for my patience limit. Still, the time spent manually gathering was less than 5% of the gameplay. And the name of the game is Forager!

Crafting is rather limited, without much motivation to build multiple of anything, which is okay because it does give a little meaning to saving up ingots to unlock the next building.

Inventory management is nonsense. It basically involved me clicking the wrong box in chests a lot. All the items already stack indefinitely, why not make them auto-stack? Why not just eliminate chests altogether and let us walk around with a proper-sized inventory?

Trading was really useless to me, with nothing I really wanted to sell or buy. There was that one time I dumped all my clay/stone into smelting and then wanted to build another furnace... but there wasn't any on sale.

Without any enemies, survival is a completely pointless mechanic.

Once you get over the initial panic when you read that running out of energy drains health, you can literally spend the rest of the game well-fed on fish without ever dropping below half energy.

Or you could get lucky and gain the ability to just teleport to every single spot on the map without even having to clear out the forests in between.

Exploration is badly done in this game. I set up a base and stayed there all game. All lands are more of the same, at least until the endgame when you go around opening every chest and collecting all those upgrades that are now useless. I didn't even get to read most of the signs until I already worked out the controls.

I don't regret my 2 hours of clicking on pixely things which make nice crisp chippy sound effects, but the game mechanics really make no sense when they're not fleshed out. There's not much replay value at the moment, and certainly no reason to sit around and idle in it.

Thanks for playing Forager and expressing your feedback on it. Honestly the deadline was fairly harsh with me.

I started making this on day 1 but up until day 7 I had no idea where this game was heading, and it was full of bugs in the terrain generation part (that took a week to make alone).

At the start of day 8 I pretty much started figuring out what I wanted to make, but then I didn't have enough time to properly execute/playtest it. The result is a bit of a buggy mess lol.

I have been working on this some more now that I had the time, and I want to do a proper revision of it with more content, revamped systems and of course, a TON of bugfixing. The new version will probably be free too!

Right now I am considering the general idea of this game. At the start of development I had Legend of Zelda meets Minecraft as a high concept, would you feel that is fun/accurate? Did you find the survival aspects the most fun? The exploration? The resource gathering/management? The base building?

I invite anyone who has any thoughts on these issues and/or ideas for the revision of Forager to send me an email at [email protected] with any feedback or suggestions you may have.

Thanks again for playing and showing interest in my little game! :)

Hello, thank you for visiting us! I'm sure some people will send to you some comments or feedbacks.

2,834 Views
0 Comments
chrpa— Jayisgames needs your help to continue providing quality content. Click for details Welcome to Weekday Puzzle! Robert Alvarez is back with another perfectly done puzzle platformer. The following game by gripgrap is an original puzzler in Sokoban style, and...  ...