Those crafty rabbits. From Bugs to the waistcoat-wearing White Rabbit who's always late, you can pretty much bet each and every one of them is up to something nefarious. In Gamaga's new mobile puzzle game Follow the Rabbit, this is most certainly the case. As the action begins you watch as a cuboid bunny hops down the path, a sack of coins leaking gold with every bounce. Being the helpful villager that you are, you take it upon yourself to follow the rabbit, collecting coins and solving some fiendish puzzles along the way. 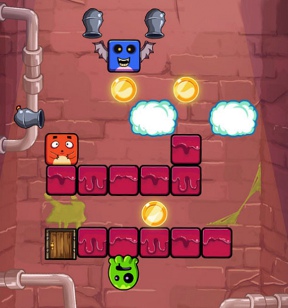 Everything starts out innocently enough with some simple exercises to teach you how the game works. Tap and slide your finger on the screen to move, sliding upwards to jump and occasionally interacting with elements on the screen with some well-placed taps. You can hop through blocks with a quick jump, shove blocks that are in your way, and use balloons to get a bit of a lift, but enemies are to be avoided at all costs. Eventually you'll make it to the exit door, but later in the game, you'll have to guide multiple characters to different exits, all while collecting as many coins as you can in the process.

Follow the Rabbit is expertly paced, and with well over 100 levels to work through, there's plenty of space to increase the challenge in a gradual manner, never overwhelming you but always keeping you motivated to play just one more level. Oh, and then there are those happy-fun visuals, a perfect fit for the mobile market, right alongside games like Cut the Rope and Pigs Will Fly. Find the Rabbit is a prime example of what a mobile game should be, as it grabs you immediately and refuses to let go until you both find the rabbit and obtain a perfect score on every level.