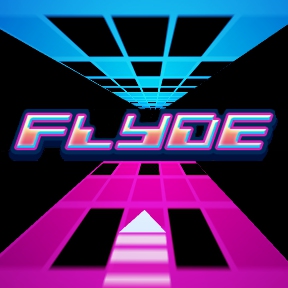 Faster. Must go faster. Change lanes. Jump to the ceiling. Pretty colors. Back to the floor. What were the instructions? "Don't touch black cells." Roger. Got it. Whoops, almost wiped out there. Must go faster. Gotta look ahead. 10,000 points. Not bad. Faster. Keep changing lanes. Always faster. Jump to the ceiling. Oooh, wavy track. 20,000 points. Back to the floor. 25,000. Still faster. Uh oh... tilting... faster...! Arrrggghhhh! Well, let's try it again...

The above pretty much describes Bobblebrook's newest arcade game, Flyde. It's a simple lane-changing avoidance game (feeling like a cross between G-Switch and SwfRoads) where you try to keep going as long as possible, earning a high score on the game's all time or weekly leaderboard. The arrow keys on the keyboard switch your triangle between 5 lanes. Running over solid cells warps you (upside-down!) to the upper or lower tracks, depending on your position, while blinking cells will alternately speed you up or slow you down. To make things challenging, as you accrue more points the camera angle begins to tilt more, and the track become more wavy and curvy. Various patterns require you to quickly change lanes to avoid any black cells, which immediately end your game. As you play, the usually blue and pink tracks shift to different pretty hues as you fly down the lanes, and later sections have neat-looking wobbling and tilting tracks taking advantage of blur effects. There's a rocking (though repetitive) soundtrack as you play, and Flyde even has personality in the form of an amusing robotic voice that comments on your progress, generally scoffing until you start earning significant points.

Despite Flyde's simple controls and concept, it's an addictive break game with a good measure of challenge to go with its slick visuals and sound. There's skill involved in keeping your eyes focused on two things at once in case you suddenly find yourself traveling upside-down on the upper track. All the while, the game requires you to remain nimble with the left and right controls, looking ahead to anticipate where to quickly move your triangle. While it would have been interesting to include some form of shooting element to the mix (and perhaps multiple lives to keep your game going longer), Flyde is an example of highly polished classic gameplay that should satisfy your need for speed on your next break.

I really, really enjoyed this game!

This is pretty fun, but it's a bit hard to tell the difference between speed boost pads and pads that send you to the other side.

This game is fun! It gets even better when you learn the tracks and start getting high scores.

Amazing game. I love that it doesn't treat you with kid gloves. Just be fully alert or die. The random pattern shuffling keeps it fresh for a while.

I'm not sure I like the voiceover clips. Each one is amusing at first, but this is a game meant to be played repeatedly, and I got tired of them quickly.

Of course, I do partly want to get better so I can hear the more complimentary sound bites, so I'm not totally against the idea.

LOOOL
I was extremely concentrated, almost beating my previous highscore when the voice goes "60000 points... don't forget to eat" I started laughing and lost control and crashed! :D