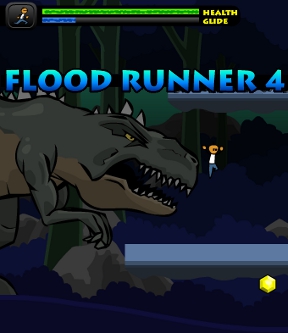 Bryan Devlin wants you run, run as fast as you can in the action-packed arcade game Flood Runner 4, where a high score is only one glorious upgrade or hard-won achievement away. Use the [arrow] keys to run and jump and don't stop. There's a flood a comin', as you might have surmised from the title, and it's going to catch up with you one way or another, so you might as well put on a good show. Nab golden tokens to earn experience points that will grant you new abilities, avoid hazards like monsters, spikes, and giant t-rexes that will hurt your limited health, and land on things like banana peels or launch pads for a boost. Some enemies can be dealt with by leaping through or on them, but if you get caught in a pinch, follow the onscreen prompts quickly to lay down a beating on your foe and keep running. If Olympic training were like this, folks, we'd see a lot more ties for first place.

The Flood Runner series has come a long way since the beginning, and the team behind it has done a great job of keeping the fan-favourite simple and addictive gameplay intact while adding enough to keep it feel fresh without being cluttered. The decision to dole out abilities like the double-jump and glide based on experience does make it a bit of a grind for a high score over skill, and a bit less immediately gratifying, though this does give the game a bit more replay value so newcomers won't feel like they've seen everything in the first two minutes. Though Flood Runner 4 is as simple as it gets in terms of gameplay and objective, the amount of surprises to see and bells and whistles to set off makes this the perfect candy-coated gaming snack for players looking for something light and fun. After all, at the end of a long day don't we all want to come home, slip into something comfortable, and forget about work by being chased around by a giant hungry dinosaur until we drown?

Runs horribly on this computer. I switched it to Low quality and it ran *worse*.

From someone that never played the previous Flood Runners I have to say I am loving this one.

Achievement Unlocked on steroids with a touch of Fancy Pants thrown in for good measure:)

Also just to mention in case anyone else missed it for a while, on the Main Menu, under My Stats it list all the unlockables and exactly what they do.

How do you know how your new abilities work? I think I've finally got a handle on "float" or whatever it's called (although I could be using it ineffectively), and I've figured out "wall-runner", but when I level up I like to be able to actually do new things.

I think this might be what @yaddab is talking about, but I don't see it.

Hi Parmeisan, I think it is what I am talking about go to Main Menu (the one with the quality toggles etc)

On the left hand side is your little guy on a diving board, mouse over him and "My Stats" option shows up. Click on that and then on the next screen at the bottom click on "Unlockables". This gives you a full explanation of the abilities and how to use them.

Wow, that is so hidden that I could not even find it when I knew it was supposed to be there. (You have to hover over the dude... wow.)

Thanks so much for pointing it out and showing me how to get there!

how do you battle the t-rex? i have no idea