So, this exists: PlantPot's Finger Hoola, a simple arcade game where you do exactly what the title suggests! It's not code for nose picking or anything strange, you just place a finger on the screen and play a game of two dimensional hula hoop. Weird, right? Strangely fun, and with a nice ambient score and abstract backdrop to soothe your eyes and ears. Who knew drawing tiny little circles on the screen would translate into such a great game? 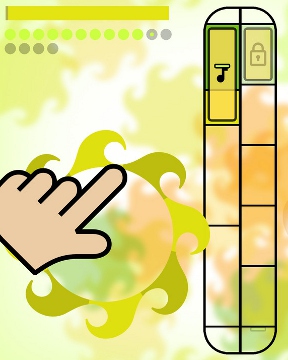 In the center of Finger Hoola's screen is a vertical bar divided into a number of small sections. These sections occasionally light up with a music note, beckoning the horizontal marker you control to come and pay a visit for a few seconds. By hulaing faster or slower you can move this bar up or down, the goal being to move it to each lit section in turn. Keep it between the lines while the rectangle fills and you'll activate the next one. Activate them all before time runs out and you'll move on to the next stage.

There are a good 70 or so levels to complete in Finger Hoola, and the difficulty smoothly rises with each stage. Later on you'll run across smaller bars with larger timers that require more precise hula expertise to hit. It's all tied together with a lovely little audio visual package that's as relaxing as can be. Even though it's such a simple game, it's a unique concept that's presented with a nice artistic flair. Perfect for quick pick up and play sessions when you want everybody in the room to think you've gone mad!