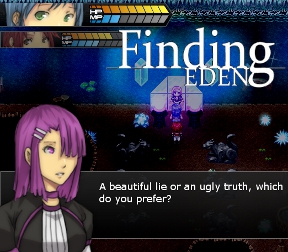 What makes a hero? Is it someone who keeps fighting, even when everyone around them insists there's no point? Or is it someone who is willing to give the most precious thing they can just for the promise of a better tomorrow? Made in just under a month as a half hour lunch break game, Sailerius and Hirei have crafted a short but remarkably atmospheric action adventure release with Finding Eden, a thoughtful game about friendship, the end of the world, and sacrifice. The story follows two young girls struggling to stay alive after an unspecified disaster befell the world and left it stripped of Mana, with virtually everyone left sleeping husks littering the street... except for the sinister Harvesters who are always on the girls' heels. With their own Mana, their life force, constantly dwindling and scraps being harder and harder to come across, is it worth carving out an existence in this bleak world... or can they find something worth giving everything they have for? 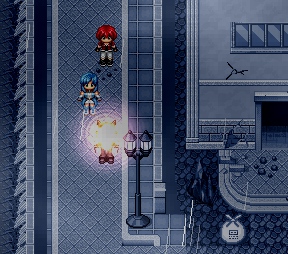 Move with the [arrow] or [WASD] keys, and interact or attack with the [spacebar] or [enter]. Combat is real time, so make sure you stay on your toes and keep moving whenever Harvesters are after you. Luckily, both girls have special abilities you can trigger using [J] that can seriously help out in a dangerous situation, but using them takes precious Mana. You can recover health by sleeping in any bed, but doing so causes you to lose a bit more Mana with the passage of time, and the only way to replenish it is, occasionally, from fallen enemies, or by harvesting it from glowing sources found scattered throughout the areas. You can save your game after sleeping, or any time you like by hitting the [ESC] key to open the menu.

Finding Eden is... a bit weird. On the one hand, it's an exceptionally well done example of how you can tell an effective story with an evocative setting within serious time constraints. The areas are beautifully designed, and the soundtrack perfectly chosen. Combat is interesting, but feels underdeveloped and a little awkward to the point where you can often just run past enemies, though the few boss battles you'll encounter do liven things up a bit. On the other hand, you're definitely going to be left with a lot more questions than answers at the end. You'll want to know more, and in a way, that's the biggest compliment you can pay a storyteller. Our two heroines are easy to care for, and while the time you spend with them might be short, it's worth making the time if you can appreciate a story that wants you to decide the ending for yourself.

Oh, when I saw the title I thought this was the sequel to Eternal Eden. :P oh well!

Um, so I downloaded the .rar file thing, and it says I need to use the correct program to open it. How do I do this?

@vamppheonix99: Use WinRAR to extract the contents into whatever folder you desire, then open the application called "Game" within it.

I've been playing this game and

the hotel where they first met

,the encounter with the blond-haired man

, and the discussion in the graveyard.

Are there any other such places? I also gave the mana to the crystal already.

I've gotten better at harvesting mana from the Harvesters, and I've collected all the mana I've come across in plants, drawers, shrubs, etc. I have no idea what to do next.