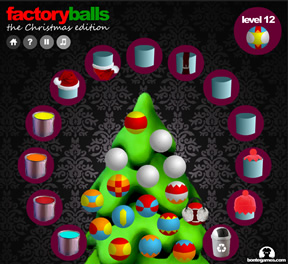 The Christmas season is upon us, and especially a time for that oh-so-wonderful tradition of decorating the tree. How about we start a new tradition? Let's decorate a tree by playing Factory Balls Christmas Edition! Bart Bonte has come up with this fantastic new edition of Factory Balls that — although fun and challenging — isn't nearly as frustrating as the real thing.

If you've never played any of the JIG favorite Factory Balls games (and why haven't you, anyway?) then the premise is simple. You begin with a blank white ball, and are given a pattern that you need to reproduce on that ball. Using cans of paint and various tools, you mask or block out certain areas of the ball and then dip it into a particular color. Step by step, masking and uncovering and dipping, you will eventually be able to reproduce the given template. Simply click and drag a blank ball to one of the tools then drag to a paint bucket and see what happens. Removing the tools is also simple, just drag the ball back to the tool "shelf" to remove it and see the lovely revealed pattern. Alternate between the tools and the buckets of paint and eventually you will get the pattern and move on to the next.

Factory Balls Christmas Edition is sort of a Factory Balls light in that it confines itself simply to recreating paint patterns, no pulling or cropping surfaces here. Instead, you have a basic toolbox of seasonal items: Santa hats, belts, suspenders, earmuffs, and bobble hats (along with several colors of paint) to recreate various decorations on a Christmas tree. Also unlike the other games in the series, the tools never change, so you get a chance to become really proficient in their use. Hopefully. Rather than dropping the completed item into a box for shipping (as you do with the other Factory Balls games) the finished ornament goes back onto the lovely tree in the background.

Along with the tools and paint come a few more features, such as a continuous loop of Christmas-type music to set the mood (or turn you homicidal, depending on how long you listen to it). There is also, thankfully, a mute button for when it all becomes a bit much. The game automatically saves when you leave, giving you the option of returning to where you left off. And along with the tools is a very handy trash can where you can discard your mistakes and begin anew.

Play all the Factory Balls games:

If there is a minor niggle about the game, it is in the rigid and precise order in which you have to use the tools. For instance, if you want to use the belts in combination with any of the hats, the belts have to go onto the ball first. If you want to use the earmuffs in combination with the hats, the hats have to go on before the earmuffs. And you have to remove the tools in the reverse order that you put them on. In some of the later levels when you are using all three things in various combinations, it can get a little tricky remembering the exact order and where you need to drag the ball to remove the various items.

That is only a minor quibble, though. Factory Balls Christmas Edition has all of the fun and challenge of the regular series combined with a heartwarming and less stressful touch of the holiday season. No physical effort, no reminding yourself that attempted treeicide is a bad thing... all in all a perfect way to enjoy this time of year without most of the baggage that comes with it. And for those who are not celebrating this particular holiday, it's still a fantastic, challenging, and amusing game to play. What are you waiting for? Get decorating!

Looks great from the shot, Happy Holidays everybody!

Done them all. Last one was horrible but easy to fix if you went wrong. (I'd dread to think how cruel it would be if they didn't have the upside-down christmas hat)

I literally screamed with joy when I saw this! I adore Factory Balls and I'm about to go play it :))!!!!

Bart!! This rocks!! Can't wait for Factory Balls for the iPhone--you will get my $$ for sure.

omg i was literally just playing factory balls 1! now i gotta go play this one then go to sleep lol

Having trouble with level twelve. Any helpful hints or suggestions?

Been having such a horrible day; thank you new and fun game!!!

Thanks grinnyp. only needed help on level 16. HONEST!!

So far, I've only needed help figuring out the first color on a couple of levels. I LOVE the ornament for level 12. I want one of those!!

Much as I love factoryballs, I'd like to echo
"If there is a minor niggle about the game, it is in the rigid and precise order in which you have to use the tools..."
Over, and over, and over again. This cannot be said enough.

grinnyp, your walkthrough leaves me in the dark at level 11, where it says:

•Drag to the blue paint them remove all tools.

I needed the walkthrough for all of 16, most of 15, and the first step or two of the 3 before that.

I like that for MOST of them (excluding the ones with white parts), it was possible to fix if you screwed up.

I like the option of the "mute music" button, but wish there had been a "mute sound" as well.

Factory Balls is fun and I'm glad they were able to put a holiday spin on it.

Dip the ball in blue paint, then remove all the accessories (belt, suspender, Santa hat, etc.) that are currently on it.

It just means that after you dip into the paint, remove all of the stuff (hats, belts, earmuffs, whatever) and you are finished.

Level 16 is just a joke, right? We're not REALLY supposed to make this...monster?

I'm a bit confused by your instructions for level 11. You say:

I don't think you meant to say

put on Y, put on X, take off X, put on Y that's already there, and put X on again

but I can't quite figure out what you did mean to say.

Actually level 16 is easier than it looks.

Figure out the middle vertical stripe. Make sure you pay attention to the triangle cut out hats, and what colors will be covered when you put them on. Once you figure it out, keep the vertical belt on it at all times. After that the rest is easy to figure out. : D

One thing I wish Bonte would do is add hovertext for the colors. I like the strategy and order puzzles, but I can't really tell the difference between the yellow and orange without seeing them next to each other. The first time I did the last ball, I did the bottom as orange instead of yellow. I had no clue what I did wrong until I opened grinnyp's walkthrough and saw it was supposed to be yellow, not orange, on the bottom.

Parse: That would be a really good idea for color-blind people as well, I think.

Thank you Parse, I was failing to figure out why I wasn't getting some sort of dancing win screen.

At some point, I started thinking it felt like dressing in layers and more layers to go out in the snow, then discovering you need to undress, then dressing up again, then going outside and deciding in ten minutes that it's too cold out with any amount of clothing on, then coming in and undressing, and having some cocoa, and thinking maybe with that cocoa you can take the cold, then dressing, and discovering the logical result of the cocoa, then . . .

...Did I just beat the game without using any help?

Kudos to Bart for the new game! =D

Grinnyp, your explanation of Level 6 is incomplete. it only gets you half the ball.

Gosh, this takes WAY too long to load! I'm still waiting. Is anyone else having this problem?

I had problems telling the yellow from the orange too.

It also got annoying removing things in order and placing them back on and having to tweak things around since certain tools had to go over and not under items. I'd have liked a remove all button.

That said it was a fun Xmas diversion. I do love Factory Balls games. It's lovely to have a puzzle game I don't need a walkthrough for. I always find myself at the end wanting more levels which is the sign of a good game. I did love how it was made Xmas themed too.

I'd almost forgotten how much fun this series was. :D

Maybe if Bonte had used green instead of orange...

I'm unsure of what you mean with level 6. I just went through it step by step and it gets you the completed ball.

Android version? I'd pay for it! You have very little competition right now.

You are absolutely correct. The walkthrough read:

When it should read:

The instructions for level 11 were missing a phrase. The walkthrough has been fixed, it should work now.

I am thankful that it's Christmas and that there's a new Factory balls!!!

nice music at the end!!
HOOOO hooo
merry christmas everybody !!

This series. It is made of awesomeness.
Every new edition released is enough puzzle solving to fry the brain, and when he releases the next one, it's been long enough that it's always a pleasant surprise.
This made 10 minutes of my life happy.

somebody likes suspenders...... now we know that bart bonte is a HUGE nerd and LOVES suspenders!!!

A Suspender is that vertical (i.e. up and down) belt. You use them in pairs to hold up your pants. Or, at least, Santa does unless dozens of Christmas specials have lied to me.

What is the suspender. ? x

"... fantastic new edition of Factory Balls that - although fun and challenging - isn't NEARLY AS FRUSTRATING AS THE REAL THING."

I'm stuck on level 8 its complicted!