In Extrication your life is filled with beer, drugs, and sex. The only thing missing is rock and roll... oh and that large sum of money you owe Fat Tony. It's never a good thing to owe Fat Tony, because he always makes sure you pay him, one way or another. In Mattias Gustavsson's free indie point-and-click adventure, you only have twenty-four hours to find a way to get out of the city. You need to find your partner and collect your investment back, get some fake papers and new name for you new life, get your bike back, and, the most dangerous, break it off with your girl. It's a lot to do when you only have 24 hours and the time is ticking down. Every click on the arrows on the screen to go to a new place subtracts time, and every question you ask people, even if it's about the weather, wears it down as well. To make things worse, some cops show up, but perhaps they might be another way to not finding yourself at the bottom of the river wearing a new pair of concrete shoes. Whatever your decision is, remember that Fat Tony's men always show when they say they will. 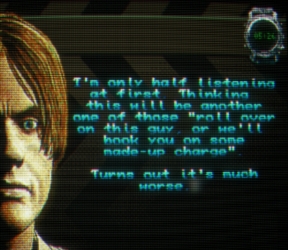 Extrication is similar to Don't Escape 2, where you only have so many hours and any choice uses up some of that time. Unlike Don't Escape 2, you aren't told how much time each action will cost you beforehand. It just takes the minutes away, and you just have to keep an eye on the clock. It's the kind of game that you're going to have to play more than once to avoid the bad ending, since you have to learn which actions lead to new options. For example, speaking to someone about someone else can give you info you need to know or start a reaction where something new happens in another scene. You can't be sure what wastes time and what is actually needed to survive. The map isn't exactly user friendly either, with its odd layout, so be prepared to lose some time going the wrong way till you learn it by heart. Extrication is also one of those games where even if you know it, and you know the character knows it, you still can't do anything about it till he talks to himself out loud to "remind" the both of you. Still the puzzles make sense and you do have a few hours you can flub and still get a reasonable ending.

Gustavsson's writing shows that you don't have to like a character to want to get him to win. There isn't really anything redeeming about the face you play. Even if you are nice to everyone there is still a lot about you that makes you kind of a sleazy chum and you have to do a few things that even goes against his moral code, but you'll do it all in the name of survival. And that's just one of the things that makes Extrication so cool. It builds that sense of urgency in you that all you are concerned about is that there is still enough time on that clock to get things done. With no save feature there is no way to gain back time. It's do or die... and then restart and try your best again. Another thing that makes Extrication desirable to play is the graphics. It's like an old school arcade adventure with the slightly discolored lines on the screen and the slight fuzz to everything. It even bows slightly just as they did back in the day when screens weren't flat enough to play marbles on. It's a perfect feel of the retro games we once played. Wrap that up with a decent story line, the rush of trying to spare a life, and three different endings and you got yourself one heck of a game.