You've been thrown out of your home and on your birthday too! You're going to have to go through Hell to get back. And I mean that as literally as possible, seeing as you're a demon and you sort of live there. Escape to Hell is from both Rob Donkin and Jay Armstrong, the latter of whom did Bearbarians so you know you're in for an action packed, dungeon-crawl brawl as you cross over the dimensional planes trying to get home. Traveling through, apparently, cost money but thankfully you can get jobs along the way. Smashing important statues, collecting magical items, saving little demons who were taken by the larger demons, or just the good old slaughter rewards you stars you can then use to cross onto the next area where new monsters await. This game makes use of both the keyboard and the mouse, and while doable with a track pad, its probably best if you have the real thing for the later levels. 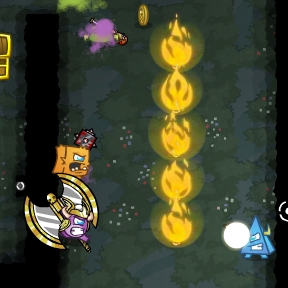 Escape to Hell starts you off easy. You get into a lull as you easily smash all the baddies and collect the loot. You probably won't even notice that it takes one hit to kill you. Then, like a switch being flipped, you're gnashing your teeth, screaming at the top of your lungs, and possibly losing some hair, as you get sick of seeing your guy blown to pieces. Your easy moseying takes a sudden dive downhill and you realize you're going to have to start strategizing if you actually want to complete anything. While there are upgrades to help, a majority of them increase the item that you have to find in the treasure chests randomly placed about. Sadly, those with a lot less power in their computer may find the start to larger levels frustrating, as there may be some brief lagging, and in that time you're being charged at by three different guys. But what a rush if you make it out alive! With the different monsters and traps and you're freedom to chose what job you want to take, Escape to Hell is a enjoyable experience of head bashing and loot collecting and with the impressive boss battle it seals any action gamer approval in the end. So let a little evil out and happy slaying!

Engaging game, but a little frustrating when the level is timed because the demon has to be in the exact right spot before it can smash anything; trial and error for the correct spot uses up the clock.

The mouse actually turns into an aiming device. Missed that the first time around.

I like it. Early levels are a bit too easy, later ones require some stealth and forethought, which is great.

It would be cool to have some enemies who can only be killed from behind, or only be killed by arrows; something like that to increase the strategic thinking.

Also are there infinite random levels or are they actually designed individually? I've played a ton and they show no signs of running out, which is hell on the completionist in me.

It'd be nice if we could retain that MASSIVE axe.

I bought all the axe upgrades and you never start with it. Also those arrow launchers could do with being a bit more visible, lost count how many times one of those shot me.

Take it from someone who's gotten to area four: The arrow shooters have a certain range, and shoot slowly. You can run faster than the arrow shooters can shoot, so you shouldn't have much trouble with them if your careful. Also, sometimes, an enemy demon stands right in line with an arrow shooter, so to get rid of them, just active it without having the demon see you. Works well against green demons, but is useful against archers as well.

The missions (jobs) for every area are endless, and you only have to go on when you wish. However, the only dungeons which are endless are the ones connected to rampage missions, which will keep bringing you down a level into the dungeon as long as you haven't killed the right number of enemy demons in a row without dying. Once you kill the right number, the floor teleporter will act as an exit teleporter.