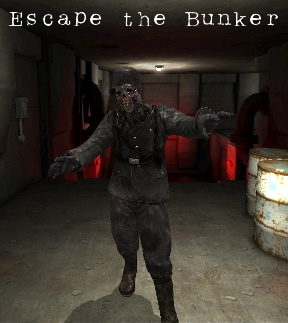 Imagine yourself serving as a communications officer in the German Wehrmacht, during World War II, doing your duty in an underground bunker. After developing a mysterious sickness, you are quarantined in solitary confinement. That was a few days ago, and you haven't heard from anyone (including the mysterious Dr. Klein, who put you here in the first place) since. Sound intriguing? It is, and with the release of Escape The Bunker: 1944 by LeviW, you can experience it firsthand. But, you know, in a non-terrifying-life-ending sort of way.

Something has chased you deep into this bunker. You lock the door behind you, and now, you're all alone, have no idea what happened to everyone else, and are completely unarmed. You think you're safe, though, so there's that. Unfortunately most of the doors are barred, and judging from the sounds coming from behind them, you want them to stay that way. If you keep looking around, maybe you'll find a way out...

Escape the Bunker may remind you of Doom or Return to Castle Wolfenstein in both style and in setting, though don't expect an arsenal of weapons at your handy disposal. This one's all about the silent horror atmosphere. Use [WASD] to walk in the four main directions and slide the mouse around to look at your surroundings. You'll find clues and documents that tell the game's chilling story as you play, and be sure to pay attention to the messages that pop up when clicking on objects, as they only appear once.

The visuals scroll by with buttery smoothness, and both the music and sound effects set a dark, despair-filled mood. There's a strong "things that go bump in the night" feel, so if you want the full experience, turn the lights off, and turn the speakers up. Escape the Bunker: 1944 is a chilling story-driven horror game that will make you want to hug something soft and cuddly when you're done.

This game will not play for me at all. It will run, and I can change the options or exit, but when I click "Play Game" at the main menu the cursor displays a load symbol for a few seconds and then nothing happens. It doesn't lock up, and I can keep clicking "Play Game" again with the same results, but the game never goes to full screen and never continues from there.