Daniel Benmergui's Ernesto - A Quick RPG is a simple and, as the title would suggest, pretty quick turnbased RPG that's also part puzzle game. The gist is that you are Ernesto, and you're descending into a dangerous (randomised!) jungle dungeon to take on the dungeon god four floors below, stocking up on all the treasure you can find along the way. The game itself is set up like a board with various icons representing enemies, items, and traps on a grid, and hovering over an icon will tell you what it is and what it does. To play, click on an entrance (any one will do), and pick a path by clicking on any adjacent icon. Ernesto's statistics are displayed at the bottom of the screen, and each enemy he slays nets him an experience point represented by a yellow bar that, when filled, levels him up and grants him an extra hit point in the form of a heart. When all those hearts are gone, it's game over, and you'll have to start over from the beginning, so make sure you nab healing kits whenever possible! 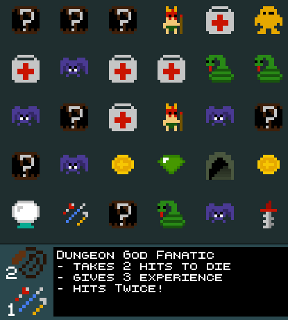 The game's main difficulty actually lies in how movement works. As you move through icons, you create a red path behind you, and while you can't cross over it if you work yourself into a corner, as long as you're not dead, you can click any icon you've passed over previously to "rewind" back to it... though of course you'll lose any items or experience you gained from the icons you would have walked over. As a result, winning the game is a matter of plotting the best possible course to the stairs to the next floor... how to grab all the treasure you can, as well as level up as much as you're able, without dying in the process. Though the game has a few neat ideas, such as disguises you can find to slip past certain enemies, crystal balls that reveal trapped caves, and whips that you can use to defeat snakes without getting poisoned, it's still fairly basic and simplistic in a way that makes it feel like it would be best served fleshed out into a larger game with more locations, enemies, and treasures. It has potential to be the sort of compulsively playable, decently thinky little game you fiddle with over and over whenever you have a chance, but as it stands, Ernesto - A Quick RPG is still a great idea that's fun while it lasts.

I don't understand why I have to go all the way back to the beginning for dying when any action that does not result in death can be immediately undone. I also don't understand why I can't undo going to the next floor without getting killed and starting entirely over again. It's design decisions like these that makes the game a little bit worse than it had to be.

When I finally have a seemingly clear path to the exit and have collected a great pile of goods this run, I get killed. Happens every time. Predictable.

I hate the pit traps. It really drives me up a wall that there are these spaces that can kill me instantly regardless of my level, health, or what items I'm carrying, especially since I always seem to find them the hard way.

And of course whenever I die I have to start all over.

I think the comments here just haven't put enough thought into the game...

It's actually an amazing little maze game that is surprisingly difficult for how simple it is.

Once you get to 3 hearts you can slowly work your way forwards and backwards surviving the traps and snakes enough to plan your way through.

You'll need to level up both yourself and your weapon as much as you can... and a whip is useless in the end.

Hey, the Kongregate version has been updated. Snakes and poison work differently, there's another weapon, damage is tweaked, the disguise mechanics have changed, and the boss fight is less obtuse. Maybe update the one hosted here too?

Maybe I'm just dumb, but I can't figure out how to upgrade the amount of damage my weapon does. Picking up weapon tiles doesn't seem to do it. . .

Thanks Buttons! Game has been updated.

Very impressed with this little puzzle game/RPG. Reminds me of the Monster Sweeper games. Always willing to give the puzzle RPG games a try, this one won't disappoint!

Weapon damage seems to go up by level.

Enjoyable but it should be larger like these two. Surprised this isn't a link dump, too.

Cute--I like it! And while I somewhat understand the critiques, it is a seriously short game, so it seems only right that death sends you back to the beginning. There is an old gaming tradition that holds that death is a semi-final event in a game--and in comparison to some of the old school games I used to play where you ended up naked, with no money or loot, and in a graveyard (or some such) from which you had to escape, having to go back to the beginning in this 4-level game seems innoccuous.

What I found to be extremely helpful:

Each of the 3 levels before the last one has an orb - there seems to always be a way to get to it without going through an unknown area or dying - that reveals the traps. Get to the orb, find the spots, mark them down, then backtrack and find a good path/exit to start.

Although it requires some dedication, I played 4/5 times with this strategy and it never failed!

make sure you are immune to poisonous gas and snake bites before entering the 3rd level.

Keep track of the amount of weapons/tools!