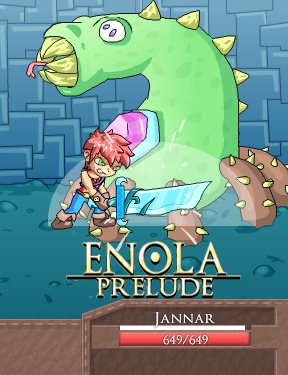 Qualifications? Kid, lemme tell you, heroes don't need no qualifications. Training, experience, proper equipment... all useless unless you have an RPG hero's most important tools. Namely, a vendetta and a really spiky haircut. In JIMP and Grindhead Games' combat-oriented Enola Prelude, you've spent your whole life inside the walled, self-sufficient city of your birth, but a journal left behind after your father's death makes you restless where the rest of the people are complacent. Together with your sword and... floating... fish... thinger?... you set out to form your own legacy and take down the beast you believe was responsible for dear old dad's dirt nap.

Just click on your choices and options to navigate through menus and the game world. The game is, essentially, a series of battles that takes you all over the world toward your eventual goal of revenge, without any exploration or chit-chat to really speak of. Fights are technically turn-based but have more in common with "Active Time Battles", which means that once your enemy's attack bar fills up it tacks its turn whether you've finished with deciding yours or not. Most battles consist of a series of waves of enemies, so fight strategically, conserving some magic points to cast healing spells and clicking the Attack or Defensive stances as the situation calls for it. Win and gain EXP towards leveling up and learning new spells or attacks, but also crafting items you can use to make better swords. Eventually, you'll gain a Limit Break ability that allows you to unleash a powerful attack when your yellow damage gauge fills up and makes use of your fishy friend in a way that will make you think he and Magikarp probably went to the same school. HA! Get it?! School? Fish?! Ha, 'cause... uh... *sigh*... okay, okay... back to work...

Enola Prelude is one of those games probably best suited for coffee break style gaming, or even just for those players who don't mind linearity and repetition. The game has a series of challenging battles, and JIMP's artwork makes watching combat play out against the increasingly bizarre beasties a real pleasure. Eventually, however, you do start to wish you could do something other than simply stab things, especially after the plot-heavy opening scene, and the lack of more in-depth character or equipment customisation also feels like it limits your involvement. Where Enola Prelude shines, however, is by providing a straight-forward and uncluttered RPG combat experience that looks great too. It'll make you hope the next installment allows for more freedom and typical adventuring, but for players looking for a simple, colourful, engaging game of fantasy fisticuffs with style and charm, Enola Prelude will provide.

Cute, well made, but stupid easy. Didn't come close to dying once and the end boss is a total joke. Poison him and durdle around until it dies as it can barely touch you.

I agree, the restore MP white magic especially is way too over powered.

I'll agree, the only time I died was when the final boss used the 5000 damage charged attack. Use poison and slow him then attack and heal as needed.

Too easy to even be fun. Felt like I was playing a prehacked game.