It's a simple life being a knight guarding the border of the land of Ederra. The lands are generally at peace, everyone tends to have their paperwork, and the most contentious situation is the daily sparring session. That all changes when a group of mysterious, armed men claiming to have "business" with the King charge past your station (apparently you forgot to make sure that the enemy gate was down). With their destination the kingdom capitol, it's a race against time as you make your way cross the continent, determined to see what their "business" is, and if it needs to be stopped. It's Ender Story: Chapter 1, a retro-styled turn-based RPG by Jordan Allen, Cat Hoang, and Matt Jones (some of the team behind Land of Enki 2). 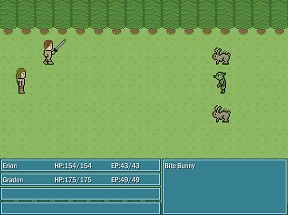 Move with the [WASD] or [arrow] keys. Select or cancel options with [J]/[K]. The inventory/options screen is opened with [P]. As you travel through Ederra, there will be enemies to fight, people to talk to, weapons, gear, and potions to buy and sell, and side-quests to complete. Ender Story: Chapter 1 is an enjoyable fantasy trek that hews closely to genre traditions. The controls take a little getting used to, and it's fairly linear as RPGs go, but those with a soft spot for killer bunnies and manna points will find it quite charming. The elephant in the room is that Ender Story looks and plays a lot like Mardek RPG, to an extent that some might think qualifies as "rip-off" status. However, the world and story are definitely the authors' own, and that's what really counts. Ender Story: Chapter 1 naturally has a bit of a "Disc One" feel, where customization and choice take a backseat to scene-setting and mechanic introduction. Still, if the forthcoming Chapter 2 is able to pay off all the build-up, then the Ender Story will definitely have been one worth being told.

I'm glad that I'm not the only one who saw the similarities to Mardek.

Did anyone find a use for the

lost wallet, if you don't choose to take the money? I assumed I missed what it was for when I got to the end of the chapter and couldn't store it.

It is a quest item

There is an old man in a house in the forest,speak to him and it will become clear

Maybe I am missing something but the controls are quite clunky, particularly
a) picking up items after a battle. Why isn't there an intuitive option to loot everything?
b) Item bank and file transfer. So we have to buy cheaper weapons so we can unequip our current ones, and THEN we have to manually click each of our items one-by-one to transfer them? Seriously?

Other than that, I like the pace of the game — it's a little grindy but that works with the old-school feel really well. The MP bars are a little low (particularly for spell-casting classes) for some characters to be useful, ack. Still, looking forward to more.

One of the most annoying thing about the game is the lack of health bars for the enemy. How am I supposed to control and plan my attacks (whether to spend EP) without this vital information? Has potential, but too many implementation problems.

Not to mention the great battle mechanics, secrets, and enneagram references.