When the stress of life sneaks up on you, as it does to us all, sometimes it's nice to take a break from the real world and check into the virtual one instead. But sometimes even our favorite games can be stressful themselves with their challenges to accomplish, achievements to unlock. Timers, metrics, collectibles, forgetting to save, running out of extra lives... Enter Empty., a stylish puzzler and a lovely little moment of Zen from Ukraine-based brothers Max and Volodymyr Dzitsiuk of Dustyroom. Made in under 72 hours for design competition Ludum Dare 37 (and also receiving the overall first prize), Empty. is a game about emptying. Comprised of ten rooms, minimalistic yet powerful and clean in their design, the player's goal is to clear each level entirely of furniture by utilizing the various colored panels on the walls, floors, and ceilings. Each room is three dimensional; players can rotate the room around with their mouse and furniture can only be cleared when it's lined up with a panel of the same color and size. Players with colorblindness should note that completing Empty. may require some assistance as many colors are similar in hue, which may make some of the puzzles difficult to solve.

There is something exceptionally warm and comforting about Empty. that makes it not unlike slipping into a soothing bath. The game balances quite expertly the challenge of its puzzles with a more meditative, mindful beat. There are no clocks or timers, no points or leaderboards. No one and nothing is judging how you interact with the game. Paired with a calm, looping synth flow soundtrack, solving each room is often relaxing, though this may occasionally betray how difficult the game can become. About halfway in, Empty. introduces multicolored, glowing furniture that will turn the colored panels they are dissolved against to their second color scheme, making puzzle solving more procedural and logical, while also making it easier to make mistakes that prevent a level from being solved. There is no undo button, something I found somewhat frustrating on a few different occasions, but players can still restart each level from the beginning at any time with no consequence or penalty. 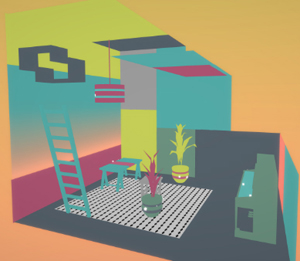 Because it's a very compact experience, there's also a lot of potential and room for further growth in Empty. One of the tutorial levels introduces the ability to dissolve smaller objects against larger objects of the same color, such as a book or a vase against a sofa or table, something I found incredibly thoughtful and creative but woefully underutilized throughout the game. There are a few tricky moments in which simply rotating the room around may have you removing furniture unintentionally, which can be aggravating in later levels when it's very easy to break a chain of logic that renders the level incompletable. Luckily, Empty. does save your progress as you go so it is not a game that must be consumed all at once and may instead benefit from occasional check-ins when the need for a break arises, or if the challenge outstrips the fun. But it certainly cannot be denied how stylish and clever Empty. is from the very start, and I'm hopeful for more levels to arrive in the future as the game makes its way to new platforms.

Empty. is not a very long experience, lasting only about an hour or so in total, but it's certainly a lovely hour and one I've found myself playing through more than once. Currently available for free or by donation for Windows, Mac, and Linux, the game was recently greenlit for release on Steam and may potentially come to iOS and Android devices in the near future. Something tells me this isn't the last we've seen of Empty. and I should certainly hope not, as the game brings a wonderful, nuanced clarity to a genre ever wanting for fresh, unique talent.