Parents. Servants. You try to make it so easy for them. But despite explaining exactly what you wanted in small, quite understandable words, they had to go and ruin your birthday party with their incompetence. However, you have never shied away from a learning opportunity (particularly when it is other people that are doing the learning and you are the teacher), and if the proper educational tool was a sharpened knife, who could blame you for using it? Well, the authorities apparently. And despite being a child genius and an orphan (... albeit self-made on both counts), it was determined that you should be treated at the Glaxochem Center for Mental Wellness. As an asylum, it has seen better days. Particularly the days before the aforementioned Glaxochem took over and turned it into a glorified test lab. Clearly the adorable heiress to the Enough family fortune cannot be expected to remain in such deplorable conditions. All you need to do is talk to the right people... Emily Enough: Imprisoned is a classic (circa 2005) darkly comedic point-and-click adventure game by Logan Worsley that takes you deep into the halls of an asylum that would be a whole lot better if the inmates were running it. 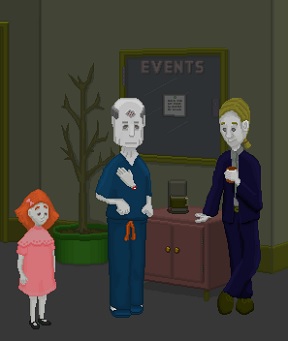 Let's reiterate something: Emily Enough: Imprisoned is a dark game. The protagonist would probably be classified as a sociopath, the bureaucracy of the world of mental illness is presented with all the cultural sensitivity you might expect from something released on the internet in 2005, and to get to the end, you'd better be ready to do some terrible things. That said, Emily Enough: Imprisoned is a terrifically funny game. A lot of that rests on the shoulder of its protagonist, Emily. As mentioned before, she's sociopathic, but certainly not randomly insane. And if she's not quite likable, she's certainly ready with a sharp dose of sarcasm for every situation. Really, in some ways, controlling her is basically to act like every other point-and-click player-character, just with a more straightforward sense of problem solving. Whether players are able to adapt to Emily's skewed point of view and the darkness of the world she inhabits, is kind of the point. 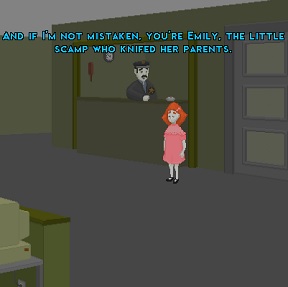 Gameplay-wise, The puzzles are generally well crafted, and fit the quirkiness of the off-kilter NPCs quite well. Sometimes the structure means you'll have to re-talk to someone you've just talked to to complete a puzzle, and certainly there are a few moments of "well, you gave the item this person needed, and for some reason that caused this door on the other side of the building to unlock", but these too are standard for the genre. Visually, Worsely does some quite evocative work with his limited color palette of pixels, constructing a dreary world of beautiful ugliness that fits the tone completely. While Emily Enough: Imprisoned isn't for the feint of heart, those who like works in the Broken Legs or Varicella vein will feel right at home being nasty. You should probably get to playing before its inevitable adaptation into a Hot Topic T-Shirt.