You can't die. Well, I mean, you can. But it never lasts. You always just wake up again at the last one of those glowing stones you passed. It's amazing and it's terrifying. You're just a simple man with a power your don't understand, whose love has disappeared and who needs to find answers. It is your quest, Elliot: an Elliot Quest. Elliot Quest is an enjoyable indie retro platform adventure by Ansimuz Games inspired a bit by Metroidvanias in the La Mulana style, and a bit more by that oddball of its series, Zelda II: The Adventure of Link. 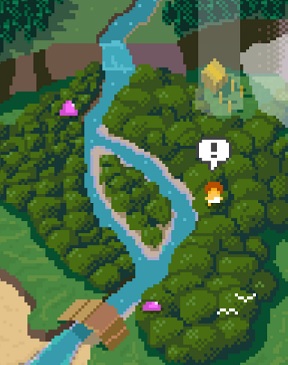 It's the kind of game that drops you straight into the action without so much as an intro scroll. One hopes then that it's not too much of a spoiler to say that you move Elliot with the [arrow] keys, and jump with the [spacebar]. Also, you fire arrows with [D], a fact this reviewer didn't realize till he started hitting random keys to see if he could do something other than jump on slimes and die. [Enter] brings up your status screen, where you can access the map of your current world, your inventory, various upgrades, and other tidbits of information. You must explore the island of Urele, complete its five dungeons and discover both its secrets and your own.

The lack of handholding in Elliot Quest is both its most frustrating and most intriguing aspect. The aim of the developer seems to be to invoke that special brand of early 90s gaming, where game plots and puzzles were trying to become more complex at a rate faster than they could really be explained on-screen, and largely it succeeds. Elliot Quest feels like a long-lost cartridge you've picked up at a garage sale, with no manual and no time to explain. It's confusing certainly, but also more than a little exhilarating as the stumbling around for direction almost feels a little nostalgic. It certainly helps that beyond mere disorientation, Elliot Quest is a superbly constructed retro adventure, filled with great scenery, charmingly weird monsters, and just enough deconstruction to keep things interesting. Death comes often, supplies are sparse, and sometimes you'll seem to be making headway into a dungeon, then realize you don't have Required Item A you need to get from Dungeon B, but that's really all just par for the course. Elliot Quest is a game that will make you feel lost, but also offers enough wonderful things to find to make it all worth it.

Fantastic game, but really a slow burner; don't get yourself be fooled by the boring start. Once you get hold of most upgrades the huge amount of content will truly shine.