It's tough to be a little element. You're at the mercy of every current of wind and lava flow on the block. Fortunately for the four elements in Element4l, they're bound together as a single entity and can switch as easily as you or I eat a whole bar of chocolate (i.e. instantly). This soothing but challenging arcade game from I-Illusions puts you in charge of those transformations, utilizing them as efficiently as you can in order to move through each stage safely. 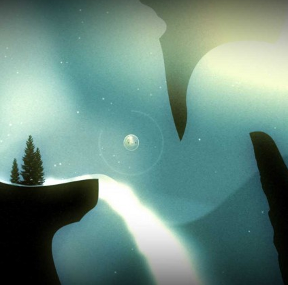 Press the [left] arrow key to turn into a block of ice, [right] to switch to fire, [down] to turn into a stone, and [up] to become a floaty bit of air. Each of these states can be toggled as easily as you press the keys, and the physics associated with them will immediately take hold. Ice slides on smooth slopes and is great for building up speed. Earth is heavy and practically invincible. Fire lets you dash forward and bounce off of certain surfaces. As air you can tap [up] to float higher, letting the wind currents carry you where they may. You have an energy meter that prevents you from spamming the keys, so timing is everything.

Element4l starts as a little bit of a puzzle game that slowly morphs into an experiment in momentum. Because you don't have direct control over where you move, you have to take advantage of every environmental feature to ensure you stay on the move. One mistake and you'll likely have to restart from the last checkpoint. It's a bit frustrating at first, especially when you lose your speed and sit there like a grumpy little lump. Once you get the hang of it, though, it's an extremely satisfying experience. Accompanied by a beautiful soundtrack and lovely visuals, Element4l is a slice of beauty wrapped around a smoothly-flowing arcade game.