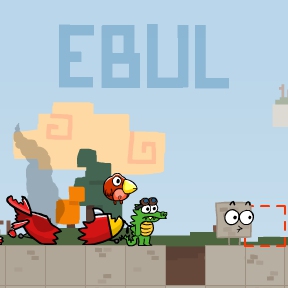 Don't you hate it when your day gets ruined by floating block platforms? If you're a crocodile-pilot named Ebul whose airplane crashed on account of one, you certainly do. After a collision and spectacular fall, Ebul finds himself stranded on a pixely, block-like world with a broken airplane. There's nothing to do but to search for various objects to try to fix his plane and continue on his side-scrolling journey.

But wait, this is no ordinary pixely, block-like world. The same blocks that caused Ebul's misfortune can be brought to life and made to bridge gaps, attack enemies, or get from point A to point B. Thus begins "Ebul", Benedikt Hummel's platform adventure and recent entry in the "Sandbox" 8th Casual Gameplay Design Competition.

You control the titular character (and his birdpal sidekick) with the keyboard while you click various onscreen blocks with the mouse. Some blocks disappear when clicked, while others grow legs or eyeglasses and can be moved around with the keyboard and repositioned anywhere on screen. This allows you to access otherwise unreachable areas in your quest to find critical items to repair your plane, such as plungers, hats, and floating cow udders. Later levels introduce the bad guys — an assortment of mean-looking blocks and wedges hell bent on Ebul's destruction. Some can be dispatched with blocks, while others are unstoppable and must be avoided at all costs. 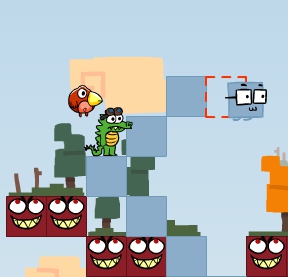 Analysis: Ebul's challenge mostly comes from figuring out which blocks to activate and where to place them to your hero's advantage. Most levels give you plenty of time to sort this out, while others require you to think and move fast with the keyboard and mouse to avoid your fate as a squashed or chewed-up crocodile. The rest of the game involves nimble keyboard presses to get Ebul moving and jumping properly. Failure may happen often, but fortunately each level can be reattempted without too much trouble (with the programmer's assurance that "It's okay!").

I enjoyed playing Ebul even though I felt it could have been presented with a little more polish. The whole game (about two dozen levels) has a minimalist feel to it, from the music and sound effects to the frugal use of animation. Everything seems to follow this cutesy and pseudo-retro approach, which works on the whole, but I still felt something was missing. A more interesting boss battle at the end and a better variety of music throughout would have helped.

Regardless, a "sandbox" platformer is an interesting approach to the genre, and in Ebul, the result is a fun and unusual gameplay experience. Give it a try and see if you can get your crocodile flying again.

I can't play this game because it requires a QWERTY keyboard, which I don't have, and changing my keyboard layout to QWERTY didn't make any change.

are REALLY annoying, and I can't get past them. Any tips?

try making gaps for the red boxes to fall into, then build a staircase above them

I have a question for the "sharks on a plane" level.
How do I get to the other "island" if all I have is two blocks?

The boss is the stupidest "boss" ever.

Hmmmm....the keyboard controls won't work for me at all. Using Chrome on OS X.

one to jump to and one to stand on.

Does anyone know what to do on the level with three springs and no blocks at all. Theres a huge gap at the end of it, and I don't know what to bridge it with.

This is a neat concept, but ouch, its performance is terrible on my computer (which is really not that old). Not great in Firefox, possibly even worse in Chrome.

You are not alone, same issue also using Chrome and OS X.

I think I might have figured it out. If I constantly twitch my mouse, I get frequent refreshes. If not, it gives me random refreshes.

I'm also having problems with the "shark" level, namely how to stop the flying red block while still being able to move around

Mitch, then there is no way of stopping the red block. Alex has a point.

you just have to outrun the flying red block. Move one blue so there are two squares of empty space between the block you are on and the block you just moved. Repeat. Once a third blue block is in view, use that one to block the red.

Could somebody please help me with the level where they say: I can see handy stuff ahead of us! Let's hurry!.

It's the level where there are three jumpers and 4 red blocks flying around. The tool at the end is very high and there's nothing to build a brigde. While jumping on the jumpers does nog bring me far enough, or gets me killed because of the red blocks..

What do I have to do in this level?

For the level with the springs and flying red boxes: When you jump on the middle springs there should be two blocks up there. If you click them mid-jump you can control them.

any hints on the last level? How am I supposed to stop the three flying red sharks or whatever they are? Thanks!

I even landed on the block with the plane in between the two springs but just cannot escape. HELP ANYONE IF COMPLETED. RAVI

Figured out at last just drop the piles from top. but target has to be bulls eye.
I AM FREEEEEEEEEEE.