Dustforce is a speed-centric acrobatic platform game from Hitbox Team. A demo first appeared back in 2010, showing off the concept and basic design. Since then, the game has undergone some silent but effective changes, improving upon the controls and adding loads of content to sweep through. It's a fast, combo-centric arcade experience that emphasizes speed and perfection, and thanks to the online highscore boards and per-level badges, you'll be strangely compelled to keep playing until everything is just right. 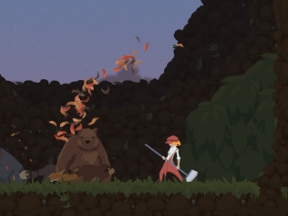 Your goal is, on the surface, to sweep up all of the mess (leaves, dust, chemicals, etc.) and work your way to the end of each short level. Really, though, your goal is to move swift and smooth through the stages, building up combos as you hop around like a janitorial ninja. You can run along the ground, run up walls to a certain extent, and even dart along ceilings. You also have two attacks to unleash (useful for taking care of solid debris blocks and dealing with the game's few enemies) and can double jump and dash at your leisure. Plenty of ways to traverse the intricate, dust-filled levels. Perfection is the name of the game, and Dustforce is structured to make it easy (and tempting) to go back and play levels over and over again until you get it just right.

Dustforce features four playable characters, a few of whom have some ability tweaks that makes playing the game a much different experience. The main boy and girl are the default characters, and, armed with a broom, they make fine choices to sweep through the game. The little girl in the purple, though, carries a duster and has a more shallow jump, a shortcoming that's made tolerable by the fact that she can triple jump instead of the usual double. How's that for a different gameplay strategy? The old man in the green has a vacuum, moves at a slower pace, and has a jump with a different arc, making him a fine choice when you want a little more challenge. You can even engage in a little local multiplayer if you've got a few friends up for some cleaning! 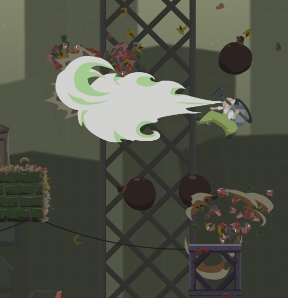 Analysis: Dustforce shares a basic design similarity with games like Sonic the Hedgehog and Fancy Pants Adventure. You're always on the move, and the first time you play a level you'll probably hobble through to the end just fine, albeit without an ounce of finesse. Then, though, you notice your score is quite low and you don't have the best badges for that stage, so you'll want to go back and try it again. And again. And again, until you're happy with your mastery over the stage. Dustforce really inspires you to aim for perfection in a way few arcade games manage to do in the modern age.

There's just something about cleaning in video games that makes us players jump around with glee, isn't there? Matching blocks in Tetris so they disappear, leaving a tidy, empty screen behind. Stacking up cake ingredients in Cake Mania so everything heads out the door without a drop of icing out of place. A large chunk of making a satisfying video game is praying upon those base parts of our brain that loves to organize. Dustforce does just this, and it does it with fantastic style.

If your intention is simply to run forward to get to the end of the game, you'll be disappointed at Dustforce's relatively short length. It's not a game about getting an ending, it's a game out perfection, and to that end, it's got plenty of content to keep you busy for quite a while!

Dustforce shows good visual sense and a smooth, flowing style of gameplay we love to see. It can take half an hour or so before you get the controls down, but as soon as it clicks, you'll be dusting and sweeping across the dirty lands as you work your way to perfection!

YES! I liked their page on facebook. So happy that the game is out.

The demo is amazingly beautiful and fun, cant wait for the real thing once I buy it.
The graphics are stunning. Cartoony but still flow-y and light. Relaxing but challenging.

I'm still hesitating on whether I should buy Dustforce or not. It was quite appealing at first, but having to perfect a level in order to unlock more content does seem a little too hard for me... I've completed Super Meat Boy in both light and dark world, but perfection wasn't required.
JohnB, I'm counting on your opinion. Should I buy it ? Should I wait for it to be in a bundle and pay the price I think it's worth ?

Kitu: Most of the levels unlock as you complete stages, so you don't have to worry about getting perfect scores unless you want to get that last handful of stages. Honestly, I was driven to get better scores, which is not something I usually do.

I thought Super Meat Boy was MUCH more difficult than Dustforce, so if you played through both light and dark worlds there, I don't think you'll have a problem with this one. Plus, it's 10% off for a few more days, if that helps. :-)

I decided to buy it a few hours ago, driven by envy. I'm not disappointed ; but the game is awfully hard ! It was really difficult to complete the Night Temple level, and I only managed to get A/D ; I don't think i'll ever get S/S on it.
Well, I guess I'll simply try to S/S as many stages as I can ( only 4 for the moment, including tutorial ) and just finish the more difficult ones ! Thanks for your advise, you're comforting me in my choice. :)