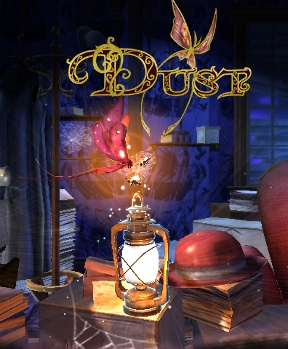 Feeling a little stuck these days? In Dust, a visually stunning conceptual game of exploration and puzzle-solving, you play a moth trapped in an attic, in love with the moon it can see through the window. Use the [arrow] keys to move around, and the [E] key to perform certain tasks, like illuminating dark areas, or resurrecting other fallen moths... which is important, since you're not going to be able to escape alone. You can use the moths that you bring back to life to move certain objects (golden numbers will tell you how many friends you need) to clear a path. Use the [arrow] keys to direct the moths you resurrect around and push them against objects lit by a soft blue glow and appropriately mystical sparklies.

Dust might just be one of the most gorgeous Unity games you'll ever play, with the rich colours and dreamlike atmosphere, aided by a soft and lovely soundtrack by Blake Allen, being a real joy to explore. It's the product of a year of work and toil from one extremely talented crew; Alex Burley handled the programming, while Alexis Boyer, Chris Wilson, Brian McClain, Pat Sullivan, and Paul Poff combined their powers Captain Planet style to bring the game to life visually and conceptually. Currently, the game is more of a concept; entirely playable and able to be finished, but by no means the final product as the team continues to bugfix, tweak, and redesign. You can find yourself randomly slipping past obstacles you shouldn't be able to when moving too quickly against the side of the screen, and the dual [WASD] and [arrow] control scheme doesn't exactly feel natural. However, it's the sort of mellow game you can sink back and relax as you play... low on challenge, but high on style and appeal. It's a short game, and though the lack of a save system means you have to finish it all in one go, it's well worth experiencing. Unlike real moths with their fat, bloated, grub-like bodies (ughughughugh), Dust is a stunning example of what Unity can do, and the perfect dreamy bit of escapism no matter what type of day it is or where you find yourself trapped.

Is this game unplayably laggy or do I just need to upgrade my RAM?

That happens for me with every Unity game, I've never been able to play one.

Seems to be a bug - pun intended - at about 15 moth friends.

The moths glitch through the bucket when I'm too close to them, making it impossible to move up without making slow, jerky movements upward.

Wow, gorgeous! Keeping in mind that this might be more of a working concept than a finished product, I'll just say that it was fun and a lovely stroll. Good, atmospheric music, interesting concept with the helper moths ( I would swap the control schemes, myself). One major like - the intro page where you can set game brightness! I have a perpetually hard time with dark games, so this was very appreciated. One major dislike:

abrupt ending was abrupt! I would have loved even a little sketch or series of sketches like the intro that fades out with the music. Having the music just cut out at the end was rather harsh, and dropped me out of the nice mood the game put me in. Just my opinion

Cleaning up the collision and pass-thru 'issues' would simply put the polish on an already enjoyable experience.

Pressing A and D at the beginning of the game, no logo in sight no matter where I am on the slider....

You may need to try adjusting your actual screen brightness if you still can't see the logo at the lightest setting.

is anyone else having trouble moving the first object?

First, you have to resurrect the dead moth (press E). Move behind the rolling object, and then press the right arrow to direct the resurrected moth to push the roller down the ramp.

nevermind, I figured it out.

so you know the box that has a hole in it and is labeled "this side up?" there's a spiderweb right next to that which I can't get past. can anyone help me?

Send your small moths into the hole at the side of the box, then fly them upward. When they come out of the box, they'll push the book off the top and the book will fall through the spiderweb.

for some reason the small moths won't go through the hole...

The game is a little picky about letting them in.

Move the large moth down as low as possible. Hold the left arrow so the small moths are pressed against the side of the box, then just adjust with the up and down arrows to fly them inside.

I wanted to try this game, but it didn't want me to. First, I had to allow scripts to run from three different sources just to get it to load, and then it asked me to use my left stick and A button, neither of which I have. (The 'a' key moves the cursor to the left.) If they can't be bothered to change their control configuration from X-Box mode (or whatever they originally wrote the game on), why should I be bothered to play it?

[Did you download it to play? I don't see the same controls references in the online version. The controls for keyboard operation were presented clearly and correctly for me. -Jay]

I can't move the bucket, every time I go up in it my moths leave me and go up without me. I've tried going slower, left, right, etc, no go. Moths refuse to help me move the bucket. (playing on home machine now, won't work on work machine)

Aha, I figured out the bucket.

You need to start below it, all the way on the floor, and then fly up while pushing up, all the way into the bucket.

There is a spiderweb I can't get through and a "Playpin" poster. I've pushed the "21" box down the ramp and it fell through the space between the beams. I also went back to the right, to (but not through) the hole where you enter this scene, dropped underneath the floorboards and went back the other way, but every time I get near the moth and light, darkness closes in before I can "E" them.

What am I missing? Thanks.

Amy, I was stuck at the same place for a while

You need to go back a bit the way you came. Knock over the board with the hole, then farther back is a bowling ball to knock down. That clears a path for the toy airplane even farther back than that, which you can now push all the way forward and through the webs.

Why does the screen go black when I'm done or almost done with the tutorial?