Dungeonism is a stylish roguelike-like adventure game from Jeffrey Fal. We say it's like a roguelike because the game takes ample opportunity to deviate from that old standard formula. Instead of dreary worlds and serious gameplay, Dungeonism draws inspiration from the likes of Pac-Man to create a lively turn-based pick-up-and-play experience that's perfect for casual players. 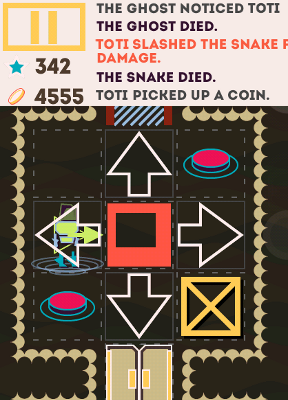 After days of traveling you arrive at a village on the edge of the Land of Dungeons. Legend says this kingdom was once a wealthy, prosperous place until a necromancer cursed the king and brought ruin upon the land. That's just a rumor, though. The only facts are that this place is crawling with monsters and there's treasure just laying on the ground. And that's precisely why you're here: to load up on some loot!

To move in Dungeonism simply tap on a tile and your hero will scuttle to that position. Pick up items, collect coins, fight enemies, and slide/break blocks using the same method. Tap the magnifying glass icon followed by on-screen objects to get a better idea of what constitutes your surroundings. Between levels you can shop for more potions, upgrade or buy equipment, or check out the plethora of stats you silently build while you play. 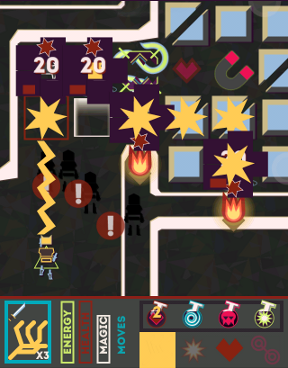 Analysis: Despite its casual set-up, Dungeonism is pretty serious about providing a heavy role playing atmosphere. The experience goes much deeper than you might think, adding different weapons, magic, and plenty of enemies to contend with. The turn-based element really comes into play once you wade into crowded dungeons. Both yourself and your foes operate in turns, meaning you can't just rush in there with swords/arrows swinging. Instead, you have to adopt tactics based on the enemy's attack patterns and your current status, taking into account your scant provisions and the location of recovery items in the dungeon.

Dungeonism accomplishes something great by making a roguelike accessible to casual mobile players. What's even greater is that the game doesn't sacrifice much depth in the process. Far from being a watered-down RPG, Dungeonism plays like an active, exciting dungeon crawler with stat management and item shops available when things calm down. It's the best bits from a role playing game with all the speed and activity of an arcade game, wrapped together in a very attractive audio visual package. You're going to love it!