Save the world, one tile at a time, in Red Winter Software's turn-based roguelike strategy game Dungelot: Shattered Lands, available for iOS and on Steam later this year. In this continuation of the addictive Dungelot saga, unchecked mana mining has made the world unstable and caused it to split apart, while monsters appear from strange portals across the land. Packed with a wide variety of challenging encounters, useful items, surprises, satisfying strategy, and some eye-catching visuals, Dungelot: Shattered Lands is one formidable roguelike that will monopolize your free time in a big way. 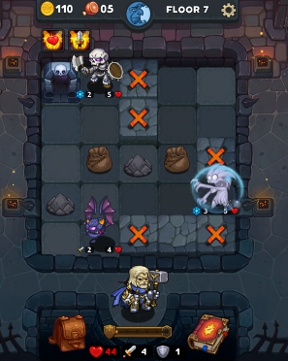 Superficially, playing is simple. Each dungeon is divided into floors, and in order to descend to the next one, you need to uncover the key that opens the door. You'll need to search tiles by tapping them to open them up. They could reveal nothing at all, treasure, or, well, monsters. When a monster is found, it locks all tiles around it, so you'll need to smash it to search them. To attack, though monsters almost always get the first hit, just tap the monster. The sword icon represents its attack, and thus how much damage it'll deal unless deflected by your slowly depleting armor, while the heart represents its health. Few monsters are straightforward... some of them draw power when you say another, others may release noxious fumes on death, and many, many other random variables are possible. As you explore, you'll want to keep an eye on your health, since if that depletes you'll have to start the dungeon all over from the beginning (though you'll keep any gold you earned), but also your provisions. Every time your hero descends a floor, they eat, and if they have nothing to eat, they'll slowly starve to death. Of course, since every floor is randomized, finding what you need is rarely easy. 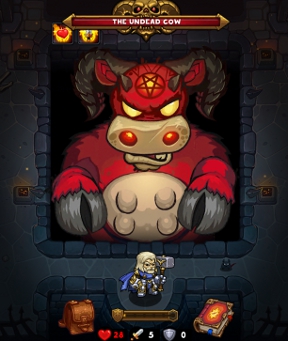 There are, of course, a lot of other little mechanics under Dungelot's hood. You can craft using supplies, or salvage them to increase your abilities. You can buy pricey but powerful artifacts for your mansion, which give permanent boosts and boons. Some dungeon floors will reveal extra powerful monsters, negate magic, be shrouded in darkness, or even give you the opportunity to, say, choose whether to help a strange old woman track down missing children. Though you only have one hero to choose from in the beginning, you'll be able to unlock more, each with their own strengths and weaknesses, like the vampire, who restores HP on killing fleshy enemies, but takes extra damage from fire. The different lands you visit, as you clear portals of powerful bosses, unlock more enemies and treasure to discover, too. For a game that initially looks to have such simple gameplay, Shattered Lands has some seriously deep complexity going on, though it manages to reward strategy in a satisfying way without alienating newcomers to the genre, though hoarding spells and single-use attack items will get you far. As with any roguelike, it can sometimes feel like success comes down to a coin toss, though Shattered Lands seems to do a good job about doling out items in fair quantities as you need them. Combat? Well, your mileage may vary. I once watched my hero miss eight times in a row against a goblin with a minor dodge boost who was nailing me with double hits every other turn, though that was hardly an every-dungeon occurrence.

Dungelot: Shattered Lands has come a long way from the original free online Dungelot game, though it's hardly unrecogniseable despite a much cuter overall design. There are no timers, no extra purchases, and the gameplay feels brisk, though some elements like crafting and morale, which can impact your character's ability to fight, feel sort of randomly tacked on. If you've been hoping the series would take a return to the classic, simple yet tasty formula of yore, Shattered Lands is closer than Dungelot 2, but still its own critter. It looks fantastic, with wonderfully detailed characters and monsters, and is enlivened by a great sense of humour. It's a natural fit on the iPad, where its big, beautiful visuals are on full display, but more importantly, the touch-based gameplay feels natural and intuitive. It's not quite as brutally challenging as some other games in the genre, more likely to challenge you to a gentleman's bout of fisticuffs than knock you down and kick you repeatedly. Dungelot: Shattered Lands is a big, beautiful casual roguelike that brings strategy and charm in equal measure. It's a meaty game that will appeal to casual fans and veterans of the genre alike, and has definitely been worth the wait.