Duncan and Katy is a mobile action/arcade game by Francisco David Moreno Pérez. Featuring two young heroes, a nutty scientist, and swarms of invading aliens, you get to run around a series of small islands picking up things like swords, crossbows, guitars, chocolate bars and springboards to stave off the attack. Keep knocking those baddies around and the professor will provide you with a weapon that can chase them away, but don't think for a second that defeating aliens will be that easy! 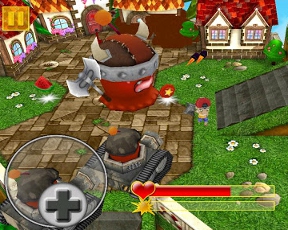 Control either Duncan or Katy using the on-screen d-pad, a method that works surprisingly well for being virtual. Two buttons on the right allow you to perform standard attacks using your primary weapon or use special items you pick up on the battlefield. Hold down the red attack button for a few moments and you'll charge up for a more powerful attack. Be careful, though, as you're vulnerable while charging, and those aliens aren't too keen on sitting back and watching you flex. Stay close to some delicious health-restoring foods and you just might survive.

Weapons, items and power-ups constantly fall from the sky. There are around 15 weapons you can use, from short range heavy hitters like the sword or hammer to long range weapons like the machine gun. Weapons have different attack speeds and damage scores, but you'll have to figure out their uses on your own, as very little is spelled out in the game. You'll have plenty of opportunities to switch weapons, so even if you get stuck with something you don't like, a new one will appear pretty soon. Secondary weapons are less numerous but arguably more useful, allowing you to set bombs, land mines, decoys and other traps to deal heavy damage to your opponents. Lots of destruction, but it's cool since you're the one causing it! 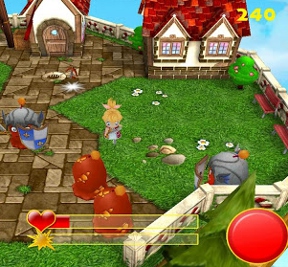 Analysis: By some standards, Duncan and Katy shouldn't work well on mobile devices. The lack of physical buttons is usually an instant game killer, and if that doesn't do the trick, the comparatively cramped screen space would be the final nail. But here it works extremely well, managing to just barely categorize itself under the "casual" category but providing a deeper experience than many mobile arcade combat games out there. It's surprisingly playable, and once you start beating up alien blobs, you'll find you don't really wanna stop.

Duncan and Katy is lighthearted and unique, but it's not without some slight flaws. For starters, the levels go on a bit too long for our taste, pushing you through three waves of enemies before lobbing a boss at you. Whew. The levels are also a bit thin and serve as little more than a backdrop for the frantic combat. It would be nice to have an environment that plays a bigger role in the fighting.

Apart from a few tiny issues, Duncan and Katy wins on every front. Lots of action, plenty of tactical engagement (especially with those bosses!), and epic enemies that do more than just sit and let you shoot them. Coat it all with a bright and shiny graphical style and you've got a perfect mobile arcade game that's well worth the small price tag!