Don't run with scissors. Look both ways before crossing the street. We've all been given safety tips throughout our lives, and adhered to them just because. But have you ever wondered what it would be like to break those rules just once, and try on that moose hat during hunting season? Spoiler alert, you die, and it's one of the many ways to die in Dumb Ways to Die, a hilarious if gruesome educational game based on a Metro Trains Melbourne viral marketing campaign. 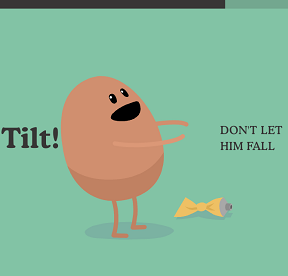 Ideally, in real life, you try to avoid things that will kill you, and Dumb Ways to Die asks you to prevent the deaths of its characters through a series of fast-paced WarioWare-style minigames. Tap the screen to swat the wasps, wipe the screen to put mustard on the hot dog for your pet rattlesnake, and tilt your device to keep the glue-consumer from tipping over, but by all means, make sure you finish your task before time runs out. If you screw up or run out of time, you lose a life; three lives gone, and it's game over.

The minigames pick up in speed after every few rounds completed, so you've got to keep your fingers alert to stay alive for as long as you can. There aren't too many minigames included, but the variety between them and the gradual increases in difficulty make them easily replayable. You're given 100 points for every round you complete, although humorous bonuses and penalties are assigned at random as you play. If you score high enough, you can unlock extra characters that appear in your train station home. The bizarre randomness of the death scenarios might deviate a bit from the campaign's initial purpose (promoting safety around train tracks... here, just watch the video), but it lends itself well to a silly and entertaining game.

One thing I neglected to mention in the review: One of the games (flying a plane) requires you to blow (or otherwise make noise) into your device's microphone. If you chose to deny the game access to your mic when you first opened it, you'll want to disable the plane game in the options menu.

I have so much trouble with the tilt level. I've had this game for months now and I'm still terrible. :(

I'm glad they fixed the puke one. It used to be so imprecise and buggy.

For the love of God I want this for Windows Phone T_T
Why did I buy that phone?

Puke is so hard

For tilt if you can remember when it's coming, make sure to have your device level and it may just play itself. You can get away with tiny tiny corrections if you keep as still as possible.

I always thought the hardest level was the piranhas. You can't flick them until they stop and you don't know where they will stop and they tend to not stop for long as the levels go by. I just furiously rub the screen on both sides and hope it works out. Still I like this game. It's fun and silly and the song hasn't gotten old. :-D