Alright, adventurers! It's time for a spot of good old fashioned temple exploring action! That's just what you get in Duke Dashington, an action puzzle game by Adventure Islands (also for Android and iOS!) that puts you in the role of the titular chipper explorer whose upper lip is so stiff he can break walls with it. Duke's quite the eager beaver when it comes to diving headfirst into collapsing temples, so much so that once you launch him in a particular direction with the [arrow] or [WASD] keys, he won't stop until he hits something. This is extremely useful, as you only have ten seconds to complete each room before the roof collapses on top of you, but it does have its drawbacks when spikes, saws, or lava pits are around. Reflexes are the name of the game, here - you have to assess each level quickly and get to dashing if you want to complete all 120 rooms spread out over four temples in good time. 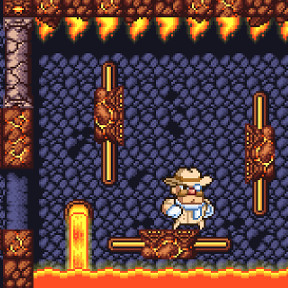 Duke Dashington exhibits a lot of the great design Adventure Islands is known for: rock solid core gameplay that develops very nicely over a deluge of short, sweet levels. You can restart each level instantly after dying, so there's never a dull moment, and you can retry hard levels over and over again until you pass. This makes the game feel fun even when it's easy. The presentation is delightfully retro, featuring some chuckle-worthy dialogue coming from the mouth of our endlessly mannish protagonist. There are a few niggles however. Duke's hitbox feels a bit wonky at times, having you die because his hat clipped against a fireball you were certain he was going to pass. And the game has no pause screen, so if you want to go back to the main page or level select screen, you have to hit refresh on your browser. It's a minor oversight made all the more annoying by how easy it would be to fix. But overall, Duke Dashington is an exceptional little action game. It's challenging but not frustrating, it's fun and funny and has plenty of levels to keep you occupied. There's even a time trial mode, where a clock keeps ticking down even as you die, motivating you to complete each temple in the shortest amount of time. Appealing to both casuals and perfectionists, Duke Dashington is a fine game. Now get that treasure, you manly explorer you!

The escape key pauses the game.

Ace game, played this for 2 days straight when i had a cold.

This game is amazing. Clearly inspired by Wario, but totally doing it's own creative thing. I actually got a bit frustrated early on before I realized I was being stupid and then plowed through the rest of the game. Some levels are really tricky, but the 10 second design meant that failing over and over was totally painless, and eventually I got through it all.

I want to listen to the Atlantis music forever.

Important to realize that you can cancel a jump or fall by dashing to one side, but can only jump from the ground. Once you know that, you basically have all the tools you'll need to complete the game. Cute, fun, challenging without being frustrating. One of the best flash games of its sort I've played.