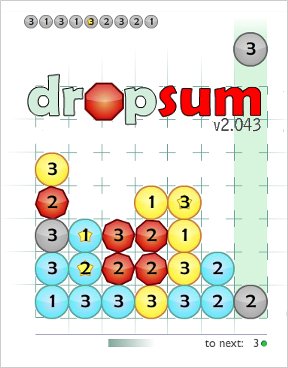 We all like the math, right? Of course we do. Who could possibly forget the intoxicating aroma of graphing calculators, slide rules, complex algorithms... What? We don't all love math? Since when? Why wasn't I informed? Bah, no matter. Once you've spent a little quality time with the math-based block-dropping puzzle game DropSum v2.0, all of you math haters will be changing your tune.

This iteration is not so much a sequel as it is a major upgrade to the first DropSum. Just like the original, you drop numbers into a grid with the goal of linking together chains that add up to 9. As you make more and more successful chains, the individual numbers involved will change color from gray to blue to yellow to red. Finally they die, leaving an opening that can be filled in by other numbers, and giving you some breathing room. Fill the grid, and you're history.

DropSum version 2 has gotten itself a shiny new facelift, with cleaner graphics and a slightly less annoying soundtrack. It also awards you exploding tiles if you manage to clear ten red numbers in one move. But the biggest upgrade is the ability to rotate the entire board 90 degrees with the [left] and [right] arrow keys Knightfall style.

This last innovation makes a world of difference. In the original DropSum, numbers on the bottom row would turn essentially dead as it became less possible to make combinations that would reach them. Rotation largely fixes this problem, allowing you access to areas of the playing field that would have grown stagnant before. This innovation also makes the game considerably easier, which could be good if you're not looking to test your brain too much, but might be a big negative if you're looking for a big challenge.

Thus, in many ways this DropSum is what the original DropSum wanted to be when it grew up. It'll also give you a reason to once again cheer that most cherished of subjects, math.

Great improvement on the original. This one is a lot more fun.

Why do graphics matter? For example, was the first Zelda game bad because of it's 8-bit graphics? No it wasn't.

Fun game, although I can just randomly drop pieces and get combos easily. Doesn't get you too far though.

Did anyone see the blog entry below the game about the guy who was so offended by the post-game analysis that he left a voice mail complaining? That's really just...sigh...

I ranked as a "Shakespearean Actor" on my post-game analysis, which is ironic considering that I actually am one...

Really fun. As the review says, fairly easy. The problem is it is so easy that eventually-around 100K points-I just stopped playing. The rotation feels like it needs some kind of constraint.

For example, maybe give the board a true "up" direction, but allow it to rotate 90° left or 90° right, but only one turn in either direction. (So, never upside down.) Then you could free some of the bottom ones, but without the ability to keep turning and shuffling pieces until it works well.

Another alternate would be to have flipping only - the board can be flipped vertically, but not rotated. This would provide access to the bottom, but without shuffling.

The problem with the current version is I was clearing pieces so easily that I just gave up and dropped a dozen or so tiles so that I would have some chain reactions.

I still gave it 4 mushrooms, but with a little more restriction (so it would feel like it was possible to actually lose), it would be more fun.

Got a score of around 240,000 (and a rank of Ninja) on my first try, but I think one try is enough. Not a bad game, but it's better suited to someone more patient than myself.

This game is crack. I stayed up past midnight and scored 690,000 points.

I agree that rotating the board makes it substantially easier to score. On the other hand, it sometimes seemed as if, following a rotation, the game would not recognize a group of 9, particularly if it was formed by a clearing out a red tile and dropping a number into place. I tried to figure out a pattern for when cascades were allowed and when they weren't, but couldn't come up with anything logical.

Second try, played for two days, got the fourth-highest score on the list. May never play again.
I agree with Carny Asada: why does the game suddenly stop recognising groups of 9 after rotating the board and clearing a group of 9 out? Very frustrating.
About the difficulty level: I like not losing after 4 minutes, and finding I'm only a million points short of the 20th-highest score for a change. This game satisfied my inner OCD.

I'm noticing a lot of glitches... not only does it sometimes refuse to recognize groups of nine after turning the screen, I have also seen balls simply disappear, into thin air, again while turning the screen. What's with this game?

I think the rotation is too much. You can almost always rotate yourself out of a dead situation, and this really defeats the challenge of the game--pattern recognition, setting up combos, and digging your way to the bottom. All of these are out the window with the so-complex-it-may-as-well-be-random dynamics of the tiles churning about while rotating.

On the other hand, I think the exploding ball would have been fantastic in the original. I played this version first and never used it, since rotating was usually more useful. Sensing from the review that the original was more challenging, I tried it out, and I enjoy a lot. The exploding ball would come in useful during the typical endgame situation: almost at the top and a layer of reds one ball below the surface.