Dropchord is a music-driven arcade game from the lovely folks at Double Fine. With a thumping beat in the background and glowing neon artwork all over, your simple goal is to press two fingers on the screen and guide a line to touch dots that appear in the center. It's somewhat reminiscent of Cipher Prime's Pulse, only with a stronger focus on avoidance and puzzle elements that pure musical skill. 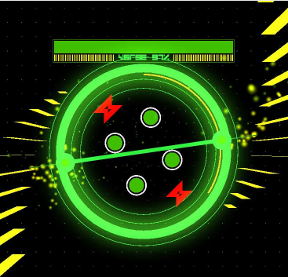 With your thumbs on the center circle, Dropchord spawns patterns of orbs that travel around the screen. They're interspersed with inconveniently placed red shapes that slide around and must be avoided. The challenge comes from touching the "good" orbs while avoiding the "bad" ones, a feat that sometimes requires speed, other times precision, and a few times crazy hands-off "jumps". When all of this is framed with thumping music and visuals that shake with the beat, you'll feel like you're in some swanky futuristic night club.

Despite its close ties with music, Dropchord isn't really a rhythm game, it's more of a puzzle-infused avoidance game. Some of the tap-based interludes veer towards the former, but don't expect to rock out with a Guitar Hero-like experience. Also be warned that players on smaller mobile devices might have a tough time with Dropchord, especially if you don't have fingers that are as thin as chopsticks.

With one or two minor faults here and there, Dropchord falls just short of being a universally lovable game. If you're ready for some intense arcade action with a heavy beat thumping in your ears (seriously, headphones are a very good idea), you won't be disappointing with this little gem!