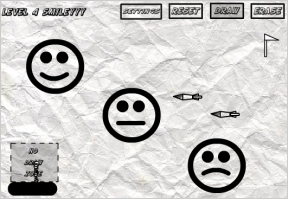 A follow-up to the original Draw-Play, Draw-Play 3 retains most of what made the original so interesting and introduces a more action-oriented approach. Like any platformer around, you control a little character who must jump and run to the flag at the end of each stage. The catch is that in Draw-Play you create the platforms. Make stairs, hop from ledge to ledge, or use the pen and push yourself up as you move. The world is your functional canvas!

Draw-Play 3 introduces a number of small improvements over the previous releases, the most friendly of which is the included option of using [WASD] to move your character instead of the slightly awkward [arrow] keys. The mouse controls the brush, simply click and move to draw a platform. The erase tool can be used to delete any drawing on the stage, whether you put it there or not.

Analysis: The biggest change in Draw-Play 3 is the heavy emphasis on action rather than puzzle solving. Instead of seeing the flag and wondering how to reach it, now you see it, know how to reach it, but must act quickly in order to make it in one piece. Spikes are still a stable obstacle in this game, but now moving baddies are here to ruin your day, blazing a trail through drawn platforms with ease. Pro tip: stay away from them.

Several of the complaints about the original game seem to have been addressed, as the poor music and sound effects have been eliminated or upgraded to be far less annoying. Hit detection still feels a bit off, however, and because the game is action-oriented, this becomes a much larger concern. In other words, don't count on a few pixels distance to save your life.

Still as fun as the others in the series, the subtle improvements and gameplay shift in Draw-Play 3 make it a great way to wind down the weekend.

I found this game to be too hard. It's neat, but the long time it takes to get past each level made it more annoying than fun.

This game was relatively easy until I got to level 35.

definitely the best one.

I found a way to cheat, that works on most levels:

When you draw a line under your man he moves. So you can make him a fast elevator by drawing up from under him. In all levels you can walk left and there's just enough space to make an elevator on the left of the box.

This makes 80% of the levels conveniently easier, and generally you can use the move on many levels to complete it faster.
I completed the whole game in 45 minutes or something.

I like the concept of the game. And it's very neatly done. My browser kept getting slower though, and on the last levels I had to close it down, and start it again. That erased my unlocks, and I forgot which levels had them. Does anyone remember where you got secret 3?

This is a great game!

One of the best methods I've found to help me clear a level is by using "Elevators".

Simply put, just draw a vertical line from bottom to top directly underneath your character. There is no need to jump. He will rise up with the line.

The fact that the character stops moving a little bit after you release the movement key instead of that instant is infuriating me. It's already hard enough timing things perfectly to get around obstacles, much less timing things just to MOVE.

Was it just me? or did the game drastically slow down the farther you get into the game?

This game was extremely frustrating, until the elevator mentioned above, then it was much much easier. Some points:

SFX off does not turn off the dying sound.
Tombstones start to clutter the area and make seeing your character more difficult.
Both the above serve as reminders of failure. I'm fine with dying a lot, as long as I can brush it off.
Avoid any situation where you can be killed before having a chance to move (i.e. those unstoppable rockets).
I don't see why I should die if I touch the laser machines. All other similar things I pass through.
Fun concept but really frustrating (until you can basically fly).

I normally only comment on games I like, but there's an exception to every rule. This game is horribly frustrating. I just can't seem to wrap my mind around the drawing with my right hand while moving the guy with my left at the same time. Of course that lack of dexterity is why I usually just stick to the puzzle games and avoid platformers.
The "drawing your own platforms" idea sounds fun. For me, at least, it was not.

The "elevator" isn't a cheat, it's a legitimate technique. It might feel like a cheat in the early levels, but later on you really have to use every trick you've got, and it more often then not will still not be enough.

Oh, and level 20 is driving me crazy. I know it's a sidetrack and not essential for continuing the game but still, the missile/cannon/spikes combo on the right is ridicilous.

Wow, this game was actually pretty easy.
But I have no clue if there is a level after level 42. Anybody else know?
If there isn',t then this game was easy. I beat all of the levels. The only one that took a little bit of time was level 38.

How do the secret levels work? I just played to the end and I don't think it has any special things.
Is it just meaning that you passed the specific level?

There is a 'secret' level in the select level menu.

look at the right edge of the playing screen. Click the box with the ? on it.

Where do I get the secrets? also, How do I get past level 30?

how do get past level 30 its IMPOSSIBLE

It's really hard to play this game on a laptop! I have a mouse for it, though.

does anybody know another "cheat" or tenchnique instead of the elevator?

how do you go to the sercret level???

but i do need level 37
anyone help?

To get past level 30 go to the right of the middle of the bottom blade. There are no spikes.

To get past 37 let yourself die at first and make a huge blob to stop the gun. there is just enough room to the left of the no draw zone to make an elevator. go to the top where you can barely still draw and make a path to the right and just above where the thing drops the spiky balls get reinforcing the gun stopper blob till your there than jump on the flag and your done!