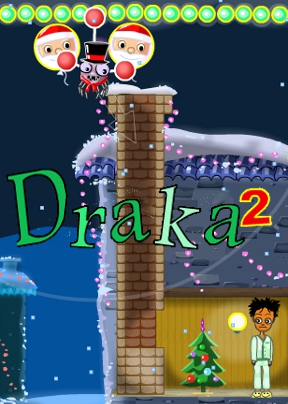 Everyone's favourite vaguely unsettling top-hatted vampirachnid is back in Draka 2: No More Christmas, the Christmas-sy sequel to Fancycle's original physics puzzle bringer of nightmares. Draka, a fanged spider with the ability to chomp and turn other people into creepy toddling fanged spider heads, is up to his own tricks again while the rest of the unknowing town gets ready for Christmas. Unsurprisingly, the whole "turning people into freaking spider abominations" thing has probably landed Draka squarely on Saint Nick's naughty list, so he decides he might as well go ahead and turn everyone, including the Fat Man himself, into spider creatures anyway. I mean, what's to lose, right? I mean, aside from a good night's sleep as you lay awake in the dark imagining that creepy, bloated monstrosity hovering just over your face in the dark.

The object of each level is to get Draka to touch each person onscreen, thereby spreading his creepy, creepy vampirism. Click on objects outlined in yellow, and, as long as they're within Draka's reach, he'll shoot out a web and pull himself towards it. You can use more than one web to maneuver yourself into place about your hapless victims, and then click the red circles to cut a particular web, or Draka himself to sever all webs at once. Some stages require some timing and the use of balloons or fireworks to get around, but just experiment and hit [R] to restart if you get stuck. There are still just twenty levels, the Christmassy spin doesn't change much of the actual gameplay, and some levels feel at once both a little fiddly and a little dependent on luck, but Draka 2: No More Christmas is the perfect twisted antidote for anyone who's had too much syrupy sweetness and cheer.