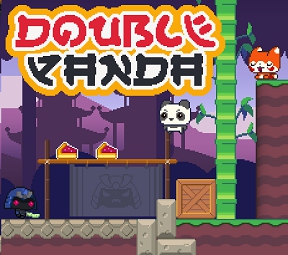 Red and Giant's master has been kidnapped by ninjas! Are you a bad enough panda to rescue him? So is the enjoyable challenge of Double Panda, Neutronized's new puzzle platformer that utilizes the power of teamwork. And should you be a fan of adorable pixelated action or The Lost Vikings-style puzzles with an eastern flair, the game is sure to panda-er to your wildest panda-sies, without causing too much panda-monium

Use the [arrow] keys to individually direct Giant Panda and Red Panda. Hitting the [spacebar] alternates player control between the two, leaving the other to take a quick snooze. The goal is to get both pandas to the checkered spot at the end of each level, collecting desserts along the way. Standing in your way are numerous ninjas, platforms, lakes, locked doors and levers. Fortunately, each panda has a number of specialized abilities to make the voyage easier. Great Panda can bop ninjas by jumping on their head, swim through lakes (with Red resting on his head), push blocks around and break old blocks by stomping on them. Red Panda can climb bamboo stalks, pick up keys to unlock doors, operate levers and run along ropes stretched between platforms. Both can jump on and from the other's head for a boost, and indeed it is required to defeat some enemies. Your master is at the end of level twenty. Good luck!

I liked Double Panda quite a bit, and not just because it clued me into the existence of the Red Panda, a creature I was unaware of prior to playing. Overall, its cute aesthetic and soothing music make for a relaxing, almost zen experience. It has a slowness of pace that, while sometimes tipping over into the frustrating, make for a welcome break from some of the more frenetic iterations of the platform genre. In fact, I found it quite stress relieving; the kind of game one plays a couple level of before bed to set one's mind at ease.

Certainly I found some of Double Panda's mechanics frustrating, and not just from their pace. Particularly, I wish it were possible to have both pandas run in unison, as it often felt like I was spending much of the time playing catch-up one way or another. Likewise, switching control from one panda to the other is shown by the camera flying to the new character. This is fine when the two are close together, but the further away they are, the longer it takes, which can be maddening when one is racing the clock. The object detection was a little finicky as well: it was annoying how Red would refuse to climb a stalk he wasn't exactly aligned with and it seemed a little arbitrary as to when he would decide to stop climbing, considering how the stalks extend into the sky.

Most of these concerns are minor and don't detract from the overall experience. Just keep in mind that this is a game that expects and rewards patience. If you're looking for a platformer that's more akin to a walk through a garden than a war-zone, it's full-on Double Panda all the way!

:D Really fun game! Only problem is how Red just loves drowning. If I don't jump on Giant just the right way, he drowns. If Giant moves too fast and Red moves a little too far off his head, when he wakes up, he falls off and drowns. Other than that, really good story. Interesting how the scenery changes level to level, almost as if they're traveling for months, rather than simply 30 minutes. :P But... RED PANDAS ARE NOW MY FAVORITE ANIMALS!!!!!!! =D

ah, game, not story. Story is almost nonexistent, but thats fine with me!

Does anyone else have problems loading mochi games? Because this game is not making it past the loading screen.

[The game loads fine here on both Mac and Windows in all browsers. Try updating your Flash Player and disabling any browser extensions you have installed, especially ad blockers that interfere with ad-supported Flash games. -Jay]

I gave it 5 levels to change my mind, but it's just too slow for me.

Epicness, I found that jumping out of the water with Red still on Pandas head worked well in most situations and avoided the falling with the switch issue.

Overall It is just too painfully slow for me,2x movement speed and this game would most likely be a lot of fun.

Does anybody have a problem with the game freezing every five minutes? I turned it on today, and for some reason it keeps messing up. I know it's not my internet because everything else is working. I even played another game to see if my Flash was lagging. It's not...so? Anybody know what to do? D:

I have the same complaint as everyone else: adorable game but movement speed is painful. I made it through fifteen levels or so, then hit one with lots of running back and forth. At about six minutes into the level I just gave up.

Good game, but the animation is jumpy so sometimes my panda dies without me knowing it. I'm using Firefox--is it the browser? My internet's pretty fast.

I love this game just because it is advertising the cuteness of the red panda. You can feel the sweetness while playing as the little thing.

I liked this a lot. Cute pandas are cute whether they be giant and aggressive or red and prone to drowning.

I was waiting for the puzzles to get hard though and they didn't really. The only thing that made the later levels difficult was the time limit. On a couple of levels I didn't stand around lollygagging and yet I finished with only a few seconds to spare. As others have said, the animation is painfully slow, especially when pushing boxes.

I cannot figure out how to get the key sitting on top of the wall in level 17.

How to get the key in Level 17:
Push the box underneath the enemy with the arrow - get rid of him with the help of Giant Panda
Bring Red Panda next to Giant Panda so Giant panda can get on the next brick level.
Walk Red Panda all way right to the bamboo tree, and take the route back left toward the key.
With the extra height of Giant Panda you can reach it now

I must be very dense, but I'm stuck on level 10: how do I open the underground lever that will lead the pandas to the ninja with the key? I've killed the giant samurai and the arrow-wielding ninja, and I've eaten all the cakes that were available. Please help!

I'm stuck on level 7 on the second lever. Help, please.

JIGuest you are the BOMB! THanks to you and your awesome tip, I have finished the game. You rock!

ugh, level 20 is really annoying me. my red panda keeps dying before the evil panda master is close enough for me to jump on.

My grandson and I figured out the first 19 levels before coming to the Net to find help. We do not have a clue what to do on the last level; level 20. We can avoid the orbs all day long but the Evil Master never comes down so we don't know how Giant Panda is supposed to jump on him. Can anyone give us info on what we do on the final level?

i couldnt see this either, but the green lines on the wall are like stairs! have big panda, jump on red panda, then big panda has to jump up on he walls. but be careful, red panda cant be hit! wait for the monster to get close to your side and then jump on him. you have to jump on him three times to kill him. if you dont under stand this then go onto youtube and look up: double panda final.
YOUR WELCOME!

red panda is so cute!

i need help with either level 10 or level 9 not sure which but there in the ground and im trying to jump over these rock things and they're too short. Somebody please help me pass the level

Double Panda is a great game!