Hey, you're trapped in a room! Where's that Nelson guy to laugh at you when you need him? You're not going to sit around and get mocked, though. You're clever, you're resourceful, and even though every time you leave the room you end up in an almost identical location, you're determined to get out. Doors&Rooms is a single-room point and click escape game by Gameday, creator of Escape the Room: Limited Time, that plays like a graphically-improved version of 100 Floors or DOOORS. Ready to get the heck outta here?! 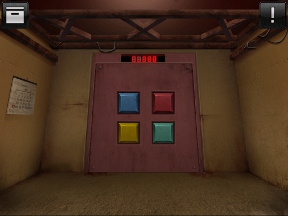 Doors&Rooms doesn't go the route of getting you to shake your mobile device all over the place. Instead, its puzzles are more traditional in style, requiring old fashioned deduction, logic, memory, and in some cases, quick thinking. The more details you pay attention to the better, keep that in mind while working through the few dozen levels currently available to play. In a fun twist, you can actually die in this game, so don't dawdle if you hear a suspiciously bomb-like ticking in the background!

The interface is entirely touch-driven and works just like you would expect. Tap an item to pick it up, then open your inventory to see what you've got. From here you can often examine, dismantle, combine or simply use items by tapping on the icons at the bottom of the screen. It's a bit of a hassle to go through several tap motions in order to use a key on a door, but when you have this much detail in the handling of inventory stock, it's worth a bit of awkwardness from time to time. 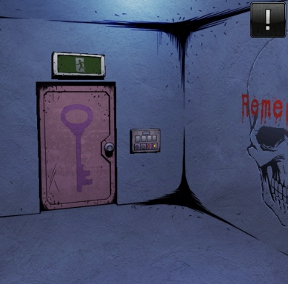 Analysis: Doors&Rooms sets itself up in a long line of puzzle games that have been recently populating the iOS and Android marketplaces. The difference, though, is that there are no weird gimmicks or awkward ideas thrown in to make Doors&Rooms "stand out". Instead, it's just a good game with good puzzles that looks fantastic. It's nice to have a one-room escape game look great for a change, and Doors&Rooms does not disappoint. Most of the visuals look like they were ripped from a graphic novel, right down to the textures and shading.

An in-game hint system gives you three levels of purchasable tips each time you get stuck. Depending on how many coins you spend, the hints themselves are often like riddles, not necessarily giving you the answer outright but teasing you with new information that may or may not be inspirational. You start with a handful of coins and can earn more over time, but if you happen to run out, an in-app purchasing system can give you a quick refill.

High production values and smart puzzles that force you to think, not just parrot back information or go into a point and click-induced trance from all your years of playing these sorts of games. Multiple locations to play through, each with several chapters to complete, and more content in the pipeline. Doors&Rooms is a great mobile escape game you would do well to snatch up right away!

It's nicely put together, I was going fine until I got to the Balance level.

The android app requires a permission to "receive text messages", which the market says "allows the app to receive and process SMS messages. This means the app could monitor or delete messages sent to your device without showing them to you."

Why would it need that?

Still, I really enjoyed this one, and am looking forward to the levels yet to come.

I didn't read the hint, but the correct rule is that weights should be multiplied by the "moment arm", in arbitrary (but consistent!) distance units, which in this puzzle can be just the distance from the fulcrum.

I assume the reason 3,5,1,2,4 is preferred over other seemingly-valid solutions is that it uses each digit exactly once, although I didn't see anything in the puzzle itself that indicated such a requirement.

Just when I thought Doors and Rooms was near perfect along comes a silly puzzle that no one can seem to explain. The puzzle involves the use of gears to open a door, (Claustrophobia, 4-3). You find 6 gears but only need 3 of them to open the door, one on top, one on the left, and one on the right. A clue you find shows three circles with 18 in the left circle, 6 in the right circle and the word Green in the bottom circle. Each gear is a different color, and has a different number of teeth and spokes. Somehow

you don't use the green cog but instead combine the blue and yellow cog, and you use the black cog on the right. The red cog goes on the left which I understand because it has 12 teeth and 6 spokes which equal 18, but the black cog has way more than 6 teeth and spokes

but no one who provides a walkthrough can explain in layman's terms why those particular gears are used. When someone gets to this level PLEASE explain your logic. Thanks

Thanks, Eraser, that's all I wanted.

The big problem with this game for me is it does not work when you have no coverage, which is exactly when I *need* the escape games.

(Otherwise known as the NYC Subway system, where I have an hour long commute both ways daily.)

Its annoying, and and is not mentioned anywhere. Meanwhile 100 Floors works fine without coverage, as does Endless Escape.

i quite liked this game until i got further into the claustrophobia stages. a bit too scary for me i think :/

hi. i've this game installed on my SONY XPERIA J
phone but it doesnt work. after i choose a level then black screen appears nothing else.. android 4.1.2