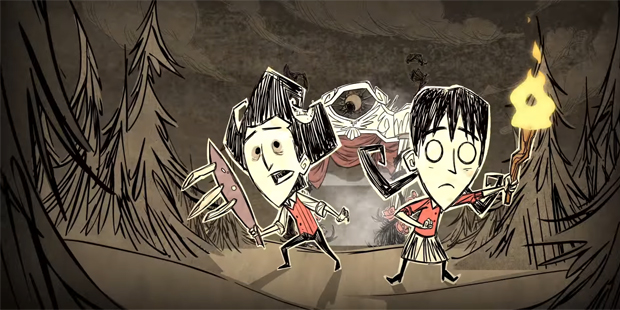 Don't Starve Together is an inexpensive game that is easy for anyone to pick up. As an addition to the Don't Starve series of dark humor survival strategy games, Don't Starve Together has an expansive ever-changing world with many ways to play. In the original Don't Starve, after choosing a character to play as, you had to figure out how to survive a ridiculous and deadly environment with limited instructions. But playing through mysterious potentially-fatal nights and fighting monsters makes you realize - your odds of survival would be a lot better with someone watching your back.

This is where Don't Starve Together comes in. The game allows for up to six players to join in on the chaotic fun on one server. The gameplay is similar to other games in the series, but you don't need to know a previous game to play. The controls are simple, the game play is much more challenging.

After choosing a character, your immediate goal is trying to keep your three stats of hunger, health, and sanity at a decent level. Depending on the character you choose keeping these stats full can have varying levels of difficulty. Characters not only have distinct skills, but also different preferences.

The character Wigfrid is great for fighting but will only eat meat. The character Wendy is weak, however she can summon her dead sister to fight for her and will eat any food. Wilson is generally a well-rounded character, great to start with because of his more detailed explanations. He can grow a beard to help you keep warm in the winter. On the downside, he doesn't have any other special skills.

With 12 characters to choose from, it's best to read up on the pros and cons of each character before choosing one, because you will be stuck with that character throughout the gameplay on your server.

Even if you've played as a character in a previous game, elements of the characters have been changed in Don't Starve Together to make the multiplayer experience fair. With no tutorial it's also not clearly explained how to use some characters skills. Unless you're playing the game with someone who's willing to explain things to you, you might have to turn to the internet for further explanations on in-game events, skills, and creatures. Most skills come at a price, so it depends on whether you think that price is worth it. To fulfil your hunger needs you must collect berries and hunt. To hunt and survive monsters and boss fights you need weapons and armor. But before you do any of that you have to survive the night, and to do that you need a fire. This is where the advantages of multiplayer start to kick in. A basic tool can be crafted with flint and sticks that you can find on the ground. You can either divide up the work with other players or see what everyone has gathered at the end of the day and pool your gains. If you're playing against other players - good luck. 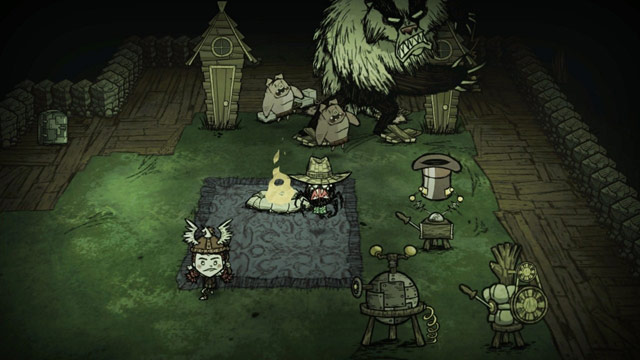 With a highly customizable environment you can heavily control how the game plays out. The game is developer friendly, allowing for you to edit code to create your own game space. By changing the code, you can change the amount of an item you have, or possibly help undo a mistake you've made in the game. While in most games this would feel like cheating, the ability to customize in Don't Starve Together makes the game much more enjoyable. Even without coding you can set what you want to appear in the world you spawn in, add player-built mods, and choose whether you want to work with other players or against them. Because of the ease of programming there are many mods to choose from, such as an increased item storage cellar, self-healing walls, or signs that allow you to teleport.

There are even mods that will translate the game into another language for you. There are also seasonal and special events that will change your gameplay, creating different game experiences at different times of the year. Each purchase comes with two games, one for you and a friend. If you don't know someone who wants to play the game, you can always create a server that allows for anyone to join. While the controls are fairly simple sometimes finding a group of people to work towards the same goal can be difficult. If you can find a good group of people to play Don't Starve Together with it can be a great multiplayer game.