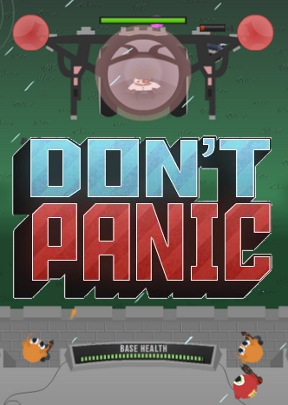 Before you ask: no, Douglas Adams has not come back to life to design a "Hitchiker's Guide" flash game. That's a dream that will have to stay a dream (well, except for this), but don't go away. If you stick around you'll get to enjoy Don't Panic, an excellent defense shooter from Ralph Damiano.

The concept of Don't Panic is simple. You play a king...or, at the very least, someone who is a crown enthusiast, and you must defend your fortress against a mad scientist and his robot minions. This king moves by using the [WASD] keys, just like most kings. Click the left mouse button to fire your weapon at the robotic invaders. To select a certain weapon you'll use the #1-6 keys. All six weapons are unlocked from the start, so don't be afraid to switch to something more powerful early. Finally, if you need some heavy firepower, walk back to your cannon, hit the [spacebar], and you'll be ready to to turn your invaders into craters. If you get overrun by enemies, don't worry too much; you can replay the level with all money you collected during the round.

Naturally, you'll need money to fund your war. Every enemy you defeat will drop some gems which you can gather up by moving your mouse over them. At the end of each level you can visit the store, which is important because you'll need to buy ammunition for your weapons, since only the default gun has unlimited ammo. This can get expensive, so spend your money wisely. You can also purchase reinforcements, AI controlled units that'll help you defend or repair your base. And of course, there's weapon mods; these are items that you can buy to add to your weapons that'll give them a damage boost or help you earn more money. Oh, and if 14 levels aren't enough to get your defense fix, there's also a survival mode. 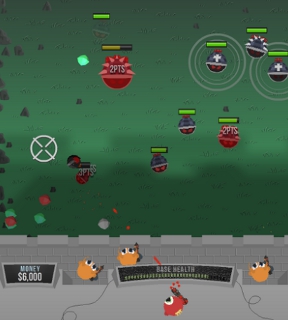 Analysis: Don't Panic isn't an especially original game, as about every core element can be found elsewhere. However, the quality of Don't Panic is not so easily found in other titles in the genre. Unless defense shooters just aren't a genre you like, then you'll find very little wrong with this one.

Don't Panic does something not enough games do: it doesn't let you fall into a routine. In a lot of a defense games, you can upgrade a weapon and depend on that weapon. In Don't Panic, one weapon alone won't get you through the level. Even if every shot is precise, you're going to run out of ammo. Then, you have to be ready to fight with a new weapon and that one won't last. You have to be ready to adjust quickly and that's what makes the game so fun and addictive. The importance of ammo makes the upgrade screen not just a screen where you click to get stronger, but a place to plan for the current and future battles. You need ammo, but reinforcements and mods could help you save ammo. Even in between rounds, Don't Panic keeps you on your toes. But, even if things get rough for you, the game is on your side. Being able to retry with all the money you earned during the round and all of your health restored gives you incentive to keep playing and helps you along.

The rounds are well designed. You're constantly being attacked, so even at the start of a level there's an urgency. It's not uncommon to be attacking a line of armored enemies that are drawing uncomfortably close to your base and then notice a group of small quick units getting even closer on the other side of the screen. These situations give the game a charge, and even if your base is healthy you can get sucked into trying to stop every last robot. A game like Don't Panic could get repetitive, even with only 14 levels, but the excitement of close-calls and too-close-for-comfort scenarios will make you want to keep playing.

Don't Panic isn't a flashy game, but it looks good. The game is filled with bright colors and your king and his subjects are odd looking creatures. It's a bit of a shame that you mostly see these wonderful creatures from the back or side as they fill up the roof of your fortress as reinforcements. Don't Panic is a well-designed game on all fronts. Ralph Damiano has made an incredibly fun and exciting game that doesn't let you rest on your laurels, but also takes measures to make sure you're still enjoying it. Each level can get you as excited as the one before.

I really must say that the moment I opened the site and saw the title don't panic I got a little reminiscent. I Love Douglas Adams and while I do not enjoy shooter games I felt the need to comment because well to say the least Douglas Adams is my hero so anyone mentioning him is AWESOME in my book!

It was by the way a game with great graphics I can't not admit that great game and great commentary!

I just want to thank both Brad and Jay for their time, I really appreciate the review of my game, here.

To be honest, I've never even see Hitchhiker's Guide, so I had no idea about Douglas Adams and the Don't Panic thing. :/

It looks like starting with the "more money" and "more damage" mods on your infinite-ammo gun is the best way to start, with reinforcements coming next. After that, it's all extra; I got through about 90% of the game with no ammo.

Has anyone else had trouble with getting the mods to move to the wespons?

Jay, I thought clicking on highlighted blue words sent us off somewhere, but when I click on "(well, except for this)" I don't go anywhere. It's always so much fun seeing where a hyperlink leads. Shouldn't "this" send me down a rabbit hole or something?
Thanks for looking into this.

[Fixed. Thanks for pointing that out. -Jay]

Fixed. Sorry about that.

Yeah, it won't let me select the mods when I try to assign them to a gun. But I was attempting to assign a secondary mod to a gun without first having a primary. Maybe you need a primary before adding a secondary mod?

nm. The game won't let me assign a primary mod either. I don't know what's wrong.

Also, can't say I'm enjoying the need to use the cross-hairs to pick up the money (before it disappears). In a shooter, I'd prefer to be able to focus on killing stuff, rather than worrying about picking up items that are strewn all over the screen. It would be nice if there was auto-loot. I'm not sure the current system adds anything to the experience.

I can't get the game to display the actual game field. If I skip the cut scene it's stuck displaying the screen when I skipped, and if I let it play through to the end it stays stuck on the last image in the cutscene. It manages to pop up the Controls and I can access the pause menu, and the game must be proceeding even though I can't see it as the screen occasionally shakes. I may try again later from a computer where I'm not using portable Firefox.

I have the same issue about trying to do the upgrade, and not been able to do that. Deal breaker for me.

In order to mod your gun click on the mod you want to attach, then click on THE NAME OF THE GUN you want to mod, not the red symbol below it. Really had a hard time modding my guns too, until I realized this

Yeah, a lot of people seem to not figure out how to apply the perks. Didn't think of that when I was testing the game. A fix for that and a lot of other things (difficulty curve too) is coming today/tomorrow.